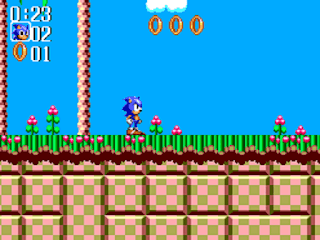 Genre: Action
Perspective: Side view
Visual: 2D scrolling
Art: Anime / manga
Gameplay: Platform
Published by: SEGA Enterprises Ltd.
Developed by: Aspect Co.
Released: 1993
Platform: SEGA Master System
According to the plot of the game, Dr. Robotnik stole the red Chaos Emerald, and the rest scattered across the South Island, because of which this island began to sink into the sea. Sonic the hedgehog and fox Tails, seeing this, decide to stop the villain and return the precious stones.
In Sonic the Hedgehog Chaos, it is possible to play for Sonic himself, or for Tails the fox. The gameplay itself is practically no different from the previous 8-bit games of the Sonic the Hedgehog series: the player's character has to go through six game zones (Turquoise Hill, Gigalopolis, Sleeping Egg, Mecha Green Hill, Aqua Planet "And" Electric Egg "), each of which is divided into three acts and is filled with certain robotic enemies called Badniks. The player can attack enemies by collapsing into a spiky ball while jumping, or using the spin dash technique, accelerating in place and attacking with a high-speed blow while rolling. At the levels, golden rings are scattered, which serve as protection from enemies, and when collected in 100 pieces, the character is given an extra life. If Sonic or Tails is damaged, they will lose all rings, and without them, when attacking again, the characters may die. In addition to rings, numerous bonuses are scattered across the levels, stored in special monitors - for example, temporary invulnerability or extra life. The passage of each act is limited to ten minutes; depending on the time spent on the passage at the end of the act, the player is awarded bonuses in the form of additional points, rings, or life. In the event of the death of a character, the game starts over, or from a checkpoint. To complete the passage of the act, you must touch the plate with the image of Robotnik; at the end of the third act, a boss battle takes place.
There are special levels in the game - "Special Stage", designed to collect Chaos Emeralds. With the exception of the first location, where the character flies through the sky, the rest of the levels resemble a maze in structure. To get to the "Special Stage", Sonic simply needs to collect 100 rings at the level. The player collects rings for a certain time and receives additional points and lives for this. There are six Chaos Emeralds in the game in total, and the last stone must be obtained after the battle with Dr. Robotnik. Unlike the blue hedgehog, Tails cannot collect emeralds. When a fox collects 100 rings, he simply earns an extra life.
‹
›
Home
View web version