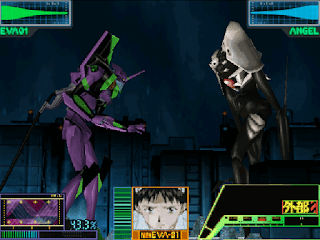 Genre: Action
Perspective: 1st-person, 3rd-person
Art: Anime / manga
Gameplay: Fighting, Shooter
Vehicular: Mecha / giant robot
Setting: Sci-fi / futuristic
Published by: Bandai Co.
Developed by: BEC Co.
Released: 1999
Platform: Nintendo 64 (N64)
The game contains all the main battles from the anime series and the film, with the exception of the battles with the angels Gaghiel, Matarael, Ireul, Leliel and Armisael. Half of the playing time is a 3D scrolling fighting game, but the camera can take different angles during the battle with the angels. The rest of the plot inserts are made in various styles, for example, VN with 3D animation.
In total, there are 13 missions in the game, in which the player will meet the main and most powerful angels of the series.
The gameplay component is mainly a fighting game, although the graphics are made in 3D, in most battles the camera is located on the side. At almost all levels, the player will have to fight with angels, although there are other opponents in the game. There are three "styles" of play that you can use. The most common form is a classic fighting game. Normal attacks do little damage, and the player needs to use specials to win. attacks by pressing certain key combinations. The second style of gameplay uses weapons and is used not only in battles, but also in mini-games. The last element of the gameplay allows the player to move forward and backward freely. This mode is used in missions 12, 12.5 and 13.
There are also off-mission modes such as Simulation Mode. Here, the player chooses Eve, which was unlocked in the story and practice mode, and by shooting poly models of Angels, he earns points. There are also models of angels that do not appear in the plot. For shots and destroyed angels, a rating is awarded, which, among other things, takes into account the number of shots and hits. It is possible to activate Vs mode using cheat codes, in which two players can select Evas with different weapons and fight each other. There is also another mode in which the player can review all the actions that he performed during the game.
‹
›
Home
View web version