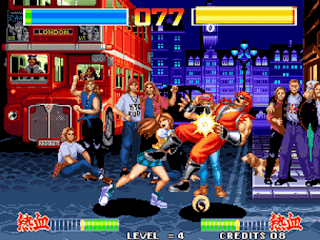 Genre: Action
Perspective: Side view
Pacing: Real-time
Gameplay: Fighting
Interface: Direct control
Setting: Fantasy
Published by: SNK Corporation
Developed by: ADK Corporation
Released: 1994
Platform: Neo-Geo
Everyone who played games popularly called "fights" knows that they are divided into beat'em up, when the hero, moving left and right and up and down, pounds a bunch of opponents, and at the end usually the boss, as well as pure fighting games, when two heroes moving only left or right fight each other. This game is an attempt to cross these two genres. It looks like you have already reached the boss and only fight with him. This feeling underlines the unnatural for 2D fighting games the ability to move in 8 directions instead of two, as well as the fact that sometimes passers-by throw useful items, such as Molotov cocktails, knives, etc. I was quite surprised when a passing granny with a stroller threw a shovel to my character. Interesting idea, but poor implementation.
‹
›
Home
View web version