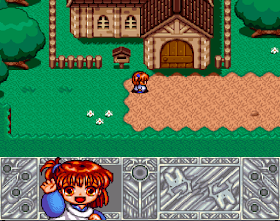 Genre: Role-Playing (RPG)
Perspective: Side view, Top-down
Art: Anime / manga
Pacing: Turn-based
Published by: Tokuma Shoten Publishing Co.
Developed by: Compile
Released: 1996
Platform: Super Nintendo (SNES)
The game that is the forerunner of Puyo Puyo. Arle Nadja is trying to get an entrance certificate for the final exams in kindergarten. She travels the world in search of eight crystals, which, if brought to the top of the Wizard Mountain, will fulfill any desire. Madou Monogatari is a scary cute game. The combat system is very original. Physical attacks are excluded, only magic. You can determine the state of health by the messages during the game or by the way Arle dances. Saving is available at any time in the game. To skip an ordinary fight, quickly press the right Shift when you are attacked. In the caves near the dragon graveyard, return to the Bazaar, there will be a dragon that will help you.
‹
›
Home
View web version