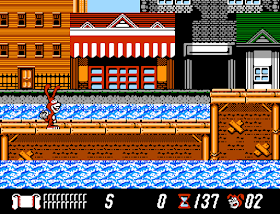 Genre: Action
Perspective: Side view
Visual: 2D scrolling
Gameplay: Platform
Published by: Capcom U.S.A.
Developed by: Now Production Co.
Released: 1990
Platform: Nintendo (NES)
This platformer may seem strange. But in reality, everything is explained simply. A man dressed as a hare is an advertising symbol of the American network of pizzerias. Igrodely took the Japanese version of the game "Kamen no Ninja - Hanamaru" and changed a lot for the western market, inserting an eared glav hero, a bunch of new graphics and a different plot. At the levels, the hero collects scrolls, filling the special attack scale. We beat enemies with a toy "yo-yo". We walk most of the levels, but in some places you can go on a skateboard and fly on a gyroplane. The boss fights are unusual: to win, we need to win the pizza-eating mini-game. The result is a funny game that can captivate you for a long time.
‹
›
Home
View web version