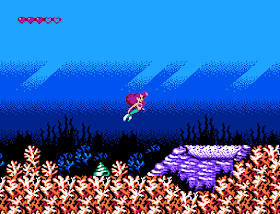 Genre: Action
Perspective: Side view
Visual: 2D scrolling
Published by: Capcom U.S.A.
Developed by: Capcom Co.
Released: 1991
Platforms: Nintendo (NES), SEGA Genesis / Mega Drive
The plot of the game only slightly intersects the plot of the cartoon: Ariel, only recently got rid of the guise of a mermaid and becoming a man, meets Prince Eric. And the newly-made couple decides to seal the relationship by marriage. But it turns out that the evil sorceress Ursula is going to take over the entire underwater kingdom, and she must be stopped before it's too late! Our heroine had to confess to Eric that she was a mermaid, return to her former guise and sail towards Ursula.
Actually, the gameplay begins. Your main weapon is your tail, which can be used to enclose enemies in a bubble. We use the enemies in the bubble as a long-range weapon, hurling them from the heart at those you dislike. Your abilities can also be pumped by opening chests: a purple sphere (increases attack power, allowing you to cope with large enemies) and a green sphere (increases the firing range of bubbles). Forks and smoking pipes also act as bonuses, which give more points after passing the level.
‹
›
Home
View web version