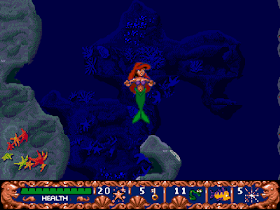 Genre: Action
Perspective: Side view
Visual: 2D scrolling
Gameplay: Platform
Published by: SEGA of America
Developed by: BlueSky Software
Released: 1992
Platforms: SEGA Genesis / Mega Drive, Nintendo (NES)
The game is based on the motifs of the popular Disney cartoon mermaid in 1992 by BlueSky. In the game we have the opportunity to choose whom we will play for the little mermaid Ariel or for her father Triton. Depending on who we prefer to play, and will depend on the plot, or rather, whom we have to save from captivity. During the game we will need to free the mermaids and mermaids. The evil witch cast them into seaweed. To pass the level, we need to release them. To understand all this and find the necessary items, the map will help us. And in order to break any obstacle it will be necessary to call for the help of a faithful friend the fish of Flaunder. There is also a store in which you can refill your health, etc.
The game only 4 rounds: The Reef, Sunken Ships, Atlantis, The Cave.
The game is also known as Ariel - Disney ', s The Little Mermaid.