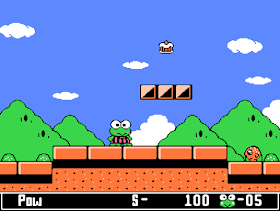 Genre: Action
Perspective: Side view
Visual: 2D scrolling
Gameplay: Platform, Puzzle elements
Published by: Character Soft
Developed by: Shimada Kikaku
Released: 1993
Platform: Nintendo (NES)
A mixture of platforming and mind games. An incident happened in the pond: harmless frogs played a game, but monsters appeared and kidnapped them. Everyone around was scared, but one brave frog named Keroppi dared to save his brothers. The levels are made in the style of a classic platformer, while boss battles are not hand-to-hand combat, but various competitions with pictures for memory and attention. An easy, enjoyable game.
‹
›
Home
View web version