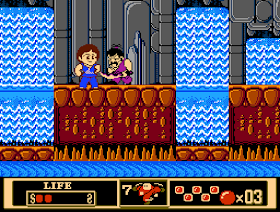 Genre: Action
Perspective: Side view
Visual: 2D scrolling
Gameplay: Platform
Narrative: Martial arts
Published by: Hudson Soft USA
Developed by: Now Production Co.
Released: 1990
Platforms: Nintendo (NES), TurboGrafx-16 (TG-16)
A game about the difficult fate of Jackie Chan. Right in front of his eyes, the villain kidnaps his girlfriend. And the brave fighter will have to go through many locations in order to defeat the boss, save the girl and use several techniques. Large figures of the hero and enemies are pleasing to the eye. Bells are hidden at the levels - these are bonus stages, where you need to jump over the clouds, then fish, then knock dummies. Prizes are given for a successful result. Nice and funny game for one player.
‹
›
Home
View web version