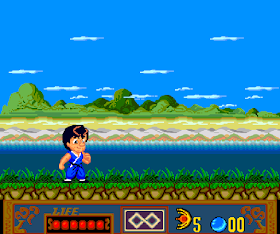 Genre: Action
Perspective: Side view
Visual: 2D scrolling
Gameplay: Platform
Narrative: Martial arts
Published by: Hudson Soft Company
Developed by: Hudson Soft Company
Released: 1992
Platforms: TurboGrafx / PC Engine, Nintendo (NES)
A stunning fight game with one of the movie actors - with Jackie Chan! High-quality game from all sides: both graphics, and sound, even gameplay.
In short, your girlfriend (or maybe even more) was kidnapped by a villain and insolent in a black cloak. But Jackie is not a miss - he is ready to go through many levels and kill the bosses, just to return his beloved!
In the game, you can collect certain upgrades for you: you can either kick from a U-turn, then you can make a high kick, etc. The levels are different, not boring and not annoying. In general, one of the best games on the PC Engine, thanks to Hudson Soft.
‹
›
Home
View web version