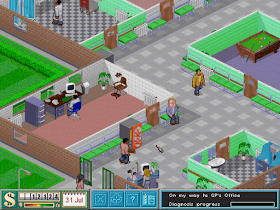 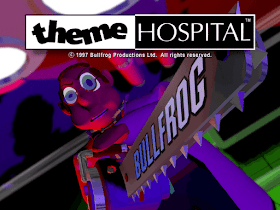 Its creators, the Bullfrog company, which previously distinguished itself by writing such a masterpiece as Dungeon Keeper, issued an endless time killer for office and home. Insanely ridiculous illnesses of patients, no less insane methods of their treatment (as an example - the main disease is excessive swelling of the head. It is removed from the surgeon by piercing it), a good economic component and, as mentioned above, the possibility of endless gameplay. Not so much according to the script as at will. It is interesting to play, fun and not boring for a VERY long time. Surprisingly, for the first time the psychological factor of the employees was taken into account, and the next time I saw such a system only in NBA Live 07. And it is amazing. But this game belongs, as we defined it - to the silver age of video games development (mid-late 90s), to be more precise, 1997 is significant for the appearance of this game on the shelves.
The graphics are soft, roundish, pleasant and unobtrusive. The music is perceived as a pure background, but the soundtrack of the treatment is the apotheosis of the sound industry after the daddy DOOM, the sounds from which are still successfully used in many (if not all) sci-fi films (and not only).
‹
›
Home
View web version