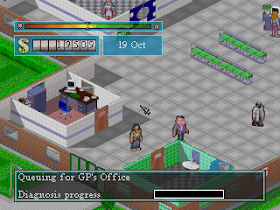 Genre: Simulation, Strategy / Tactics
Perspective: Bird's-eye view
Visual: Free-roaming camera, Isometric
Pacing: Real-Time
Gameplay: City Building / Construction Simulation, Managerial / Business Simulation
Interface: Point and Select
Narrative: Comedy, Healthcare
Published by: Electronic Arts
Developed by: Bullfrog Productions
Released: 1998
Platforms: PlayStation (PSX, PS1), DOS
Theme Hospital consists of ten missions, each of which marks a whole stage in the development of your clinic. The beginning of each task is preceded by a small clip in which the person representing you moves along the playing field symbolizing your work biography and stops on picturesque pictures that mark important milestones of this work path. In general, the game is full of symbols and allusions, and this is especially evident in the clinical picture of the diseases that the game developers awarded to the unfortunate patients of your hospital. For example, a tongue too long for phlegmatic Englishmen from Bullfrog is considered a dangerous disease that is treated with surgical intervention, and a characteristic illness in the style of the series "X-Files", called "partial invisibility," can be cured with a couple of antibiotic packages.
Theoretical research is, of course, good, but in the hospital you will come across everyday prosy problems. It is necessary to fight epidemics, for which it is necessary to hire a wide variety of specialists or to repel the invasion of rats with the help of an army of cleaners.
In general, I must say, it is rather difficult to delve into the essence of the game. The first mission usually takes an hour - and not because the task is too heavy. Imagine that you are just starting to master the possibilities of the game, studying its main menu. And from the first seconds you come across so many different options of medical, economic and human nature that you are immediately attacked by heavy thoughtfulness, which lasts about forty-five minutes. The next ten minutes is enough to complete the mission.
What in this game derives from itself and causes a feeling of acute rejection, so this is management. One of the five basic principles of ps1 is that the more the game is similar to the strategy, the more inconvenient it is to play on the gamepad. There are, of course, exceptions, but Theme Hospital falls under this rule completely and unconditionally. The gamepad is simply not designed for this game. If time does not press you, you can try not to pay attention to this annoying inconvenience. Is it really important that you get into the right box the first or fifth time. The main thing is not to worry, to breathe deeply and try to restrain your emotions, especially when the bench once again becomes completely out of place, and the tub with the ficus blocks the operating room door. Of course, in such cases it is necessary to use the mouse for ps1 - it is a mouse for all mice, or, as I was recently told, a "mouse of a real mouse color". Excellent, of course, a thing, but not very common. But, if you really believe in your desire to pass strategic games on the PlayStation, be sure to get yourself a similar device. In my deep belief, another manipulator for complex games like Theme Hospital is no more suitable than a joystick for working in Photoshop.
The graphic decision of the game can not be called bad or good. To complain, in general, there is nothing: all the objects are drawn in enough detail, the palette is bright and saturated, and all the inscriptions that appear during the game are read easily and do not interfere with the general review. But the figures of patients and doctors hurrying down the corridors are made so small that it is often very difficult to hit them with the cursor. In general, Theme Hospital is done neatly, but does not shine with special beauty. The most vivid impression left by the cutscene, in which the animated doctor enthusiastically crows the doors of nurses and operates patients using a chainsaw. Then everything becomes much less colorful and more prosaic.
Sometimes the drawbacks of graphics lead to serious inconvenience for the player. For example, it is extremely difficult to follow the small, brisk patients, who also strive to collapse in the middle of the corridor with an attack of appendicitis. Well, by and large, all this is not particularly important. Why, in fact, all these graphic refinements in a strategic game are needed? After all, the main thing is the unity of style. And the style in this game is simply beautiful: the shape is completely consistent with the content. Gloomy hospital humor in a remarkable way coincides with the very grotesque design of the clinic. The design of medical equipment resembles similar developments from the cult Spielberg cartoon "Pinky and the Brain" - for this, a lot of pipes and light bulbs are used. As for the functional purpose of these units, it simply amazes with its diversity. There are also devices for reducing the head, and an apparatus for thickening the seriously ill from the cloudy jelly back into healthy and joyful people. In general, this game is so diverse that it even tires a little. Still, ps1 is a arcade machine, and excessive gravity does not suit him.
In general, this new game from Bullfrog deserves high praise. Many of the lovers of strategy in the style of god-game claim that Theme Park was much better, and all these hospital wards can not be compared to a single carousel from the park. Let us leave this statement to the conscience of the speakers. Maybe it's wrong, but it seems to me that the hospital simulator is still more conceptual than the park simulator. The modern person in most cases will prefer to operate the cosmodrome or police station, rather than a vegetable shop. Although, perhaps, I'm too subjective. In any case, Theme Hospital is a good game.
‹
›
Home
View web version