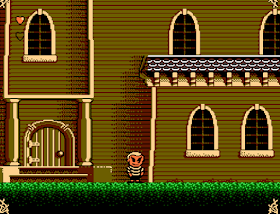 Genre: Action
Perspective: Side view
Visual: 2D scrolling
Gameplay: Platform
Published by: Ocean Software Ltd.
Developed by: Enigma Variations Ltd.
Released: 1993
Platform: Nintendo (NES)
"The Addams Family: Pugsley's Scavenger Hunt" is the third game on the television series "The Addams Family". In it we play as Pugsley. As in the previous part of the game, all family members were kidnapped by monsters, but this time the son of Gomez comes to the rescue. And again, a very large world to explore awaits us!
The platform part of the gameplay has not changed. All the same jumps on enemies, the same running around for bonuses (only instead of money now you need to collect sweets), again - bosses. It is possible to note a wide variety of enemies, beautiful and original design of each level, and, of course, the nonlinearity of the plot.
This time, the developers have abandoned the quest component of the game. Now the main character has no items in his inventory, no need to look for any keys, nothing restricts your movement around the big world. And black humor has also disappeared somewhere, but in the last game there was a lot of it ...
In general, "The Addams Family: Pugsley's Scavenger Hunt" is a pretty high-quality game, it should appeal to all fans of platformers, and especially to the fans of the Addams Family.
‹
›
Home
View web version