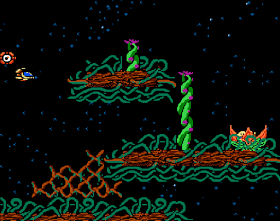 Genre: Action
Perspective: Side view
Visual: 2D scrolling
Gameplay: Shooter
Setting: Sci-fi / futuristic
Published by: Hot-B Co.
Developed by: Hot-B Co., Pixel
Released: 1991
Platform: Nintendo (NES)
You find yourself on an alien planet dominated not by people, but by plants. You, of course, cannot accept this. So - run into the ship, shoot the enemy flora. Button A - shoot forward, button B - back. Each level will throw at you the most unique obstacles, your enemy will be not only opponents, but the landscape itself. Plus, include interesting boss fights where you need to think about and endless credits to help any patient player see the end of this game sooner or later. Before starting, it is useful to go to the menu and configure the behavior of weapons and satellites.
‹
›
Home
View web version