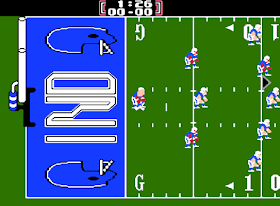 Genre: Action, Sports
Perspective: Side view, Top-down
Sport: Football (American)
Published by: Tecmo
Developed by: Tecmo
Released: 1989
Platform: Nintendo (NES)
The original arcade version is distinguished by a large dual-monitor cabinet, support for up to four players, and the ability to break tackles. Only two fictional teams can be chosen: the Wildcats and the Bulldogs. The 2D graphics are also more advanced than the NES version, as the original arcade has a larger color palette and more detailed sprites.
The NES version allows two players to play instead of the four in the arcade. The player can choose between three modes: one player, two players, and coach. In single player mode, the player chooses a soccer team and plays against the computer. After each game that the player wins, the computer chooses another team to play as, and the player is left with the original choice. In two player and coach modes, the player and another human will play a game, but players only choose the moves in coach mode (which cannot be done in the arcade version).
In both versions, the playbook consists of only four offensive plays. In defense, a player selects a play based on anticipation of the choice of attack; if chosen correctly, it results in a breakdown of the offensive line and well-covered receivers, thus setting up a possible looting or interception.
Although it includes the names, rosters, and stats of actual National Football League (NFL, translated as National Football League) players from a mix of the 1987 and 1988 seasons, the gameplay limits the degree of imitation of the players. of video games compared to real life gamers. Unlike the NFL, the arcade version only allows ten players per team on the field at a time, while the NES version only allows nine each, as opposed to the standard 11 players. The offensive player with the ball tries to avoid the defenders, and the defenders try to avoid the blockers, tackle the player with the ball, or intercept the player.

Tecmo Bowl contains twelve teams, each equipped with four plays. Most teams have two running plays and two passing plays. The exceptions are San Francisco and Miami, which have three passing plays and one running play.
Tecmo was unable to obtain the NFL's consent to use actual team names. As a result, teams in the game are uniquely identified by their city or state of origin. However, through the NFLPA license, each roster mimics that of the NFL team based in the same city or state. Tecmo Bowl only uses players from twelve of the best and most popular teams of the time.
The teams featured in the game are Indianapolis, Miami, Cleveland, Denver, Seattle, Los Angeles (Raiders), Washington, San Francisco, Dallas, New York (Giants), Chicago, and Minnesota.
‹
›
Home
View web version