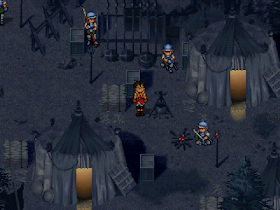 Genre: Role-Playing (RPG)
Perspective: Top-down
Pacing: Turn-based
Gameplay: Japanese-style RPG (JRPG)
Setting: Fantasy
Published by: Konami of America
Developed by: Konami Computer Entertainment Tokyo Co.
Released: 1999
Platform: PlayStation (PSX, PS1)
The second part is rightfully considered the pinnacle of 2D RPG development and an excellent continuation of Suikoden. The characters, the plot, the quality of the narrative - everything that was at a fairly average level in the first part has reached unprecedented heights in Suikoden II. The graphics remained sprite, but gained noticeably greater detail, allowing the scenes to acquire the necessary drama; the combat system has practically not changed - only strategic battles began to resemble TRPG. A large number of characters from the first part returned to the ranks of the new army.
In the center of the story of Suikoden II are 2 bosom friends, Rio and Joey, by the will of fate found themselves on opposite sides of the barricades. Having become hostages of the situation in which they found themselves, and moved by the power of the True Rune shared between them, they continue the confrontation.
‹
›
Home
View web version