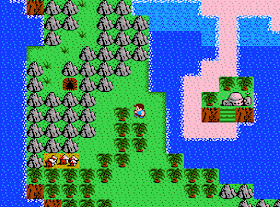 Genre: Action
Perspective: Bird's-eye view
Gameplay: Arcade, Puzzle elements
Published by: Nintendo of America Inc.
Developed by: Locomotive, Nintendo R&D3
Released: 1990
Platform: Nintendo (NES)
The game is a mixture of several genres, there are even elements of logic. On a certain island, Dr. Jones is kidnapped only because he deciphered part of an ancient manuscript and learned some secret. His nephew is the only one who can help him. It's time to go. Instead of a non-linear open world (like in Zelda), we now have a division into chapters with different locations. First you have to wander around the village and talk to people. Then you go down into the dungeon, where you solve various riddles and fight enemies with your yo-yo - a rather original weapon. Riddles are the pearl of the game, they will be remembered for a long time. Well, and then the hard way through the cave - to the laboratory of Dr. Jones. Single player game.
‹
›
Home
View web version