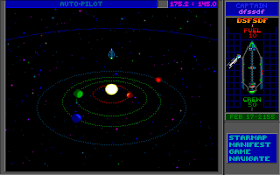 Genre: Role-Playing (RPG)
Perspective: Top-down
Visual: 2D scrolling, Fixed / flip-screen
Pacing: Real-time
Gameplay: Arcade, Mini-games
Interface: Direct control
Setting: Sci-fi / futuristic
Vehicular: Space flight
Published by: Accolade
Developed by: Toys for Bob Inc.
Released: 1992
Platforms: DOS, 3DO Interactive Multiplayer
An explosive mixture of space strategy, quest and arcade with a stunning storyline. The game, which immediately became a cult after the release, and still remains so - the number of fan sites dedicated to Star Control simply cannot be counted! One of those games that can be sent to aliens as proof of our intelligence.
The plot begins with an almost detective intrigue - you, as the captain of a reconnaissance ship sent from one of the former earthly colonies, fly up to Mother Earth, messages from which last came to your home planet about a hundred years ago ... At first glance, everything is on place - the sun still shines, the moon also revolves around the cradle of humanity, only there is a small problem - the Earth is closed by some kind of energy shield, it is impossible to land on it, there is no connection, of course, who is to blame and what to do is unclear. In deep thought, you dock with the lunar orbital station (by the way, where did it come from?) ... And since the beginning of the game, a maximum of three minutes have passed!
In your movements in the Galaxy, you are not limited by anything except time - initially you are given 5 years, but it is very easy to meet this deadline, there will be no rush. For the rest, fly wherever you want, land on any planets you like (and there - collect minerals, look for artifacts, hunt for all kinds of living creatures - lead, that is, the life of a real discoverer), meet aliens, fight, trade, - the whole world at your disposal!
By the way, about aliens - the diplomacy in the game is done very nicely, in a quest manner - in a conversation you just need to choose one of the proposed lines, you don't need to write anything ... Extraterrestrial civilizations, by the way, are spelled out very well - each of them has your own religion, culture, your view of the world (from "die all living things" to "do not hit us, we will do everything!"), your spaceships, from which you can form your own fleet, which will fight for you in arcade battles. Space battles is a game within a game, a rather unpretentious shooter like Asteroids, and it is not necessary to control the ship yourself, you can delegate this honorable duty to a computer.
‹
›
Home
View web version