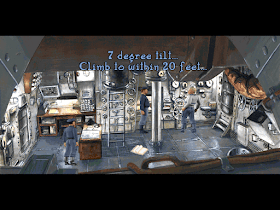 Genre: Adventure
Perspective: 3rd-person
Visual: Cinematic camera
Gameplay: Graphic adventure, Puzzle elements
Setting: Interwar
Narrative: Horror
Published by: I-Motion
Developed by: Infogrames Europe SA
Released: 1995
Platforms: DOS, PlayStation (PSX, PS1)
Prisoner of Ice takes place in the 1930s, initially in Antarctica. The player plays a young American officer, Lieutenant Ryan, assigned to the British submarine HMS Victoria.
When the game starts, the submarine sails to Antarctica in order to rescue a Norwegian scientist who recently managed to escape from a German Antarctic base (it is mentioned later in the game that this base was built near the ruins. old mentioned in The Hallucinated Mountains). The submarine, in addition to the Norwegian scientist, received two mysterious cases, stolen from the Nazi base. The Norwegian scientist, for his part, seems in a state of shock, stammering only incomprehensible words, evoking under hypnosis a certain “Cthulhu”. It was then that a fire broke out on board ...
‹
›
Home
View web version