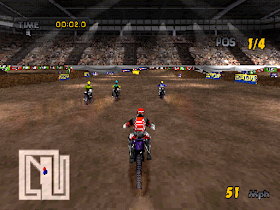 Genre: Racing / driving, Simulation, Sports
Perspective: 1st-person, Behind view
Vehicular: Motorcycle
Published by: Take-Two Interactive Software
Developed by: Deibus Studios Ltd.
Released: 2001
Platform: PlayStation (PSX, PS1)
Race on different types of terrain, with the ability to perform a variety of stunts. The game offers several game modes: Race (random choice of a track, rider, bike), Stage 1 (three types of tracks are available, Motocross, Supercross, Freestyle, according to three types of rules: Practice - free, unrestricted mode, in which you need try to score as many points as possible for performing tricks; Race - competition for the first place; Timed - you need to go through the sections of the track in the minimum amount of time), Championship (the main type of game, which includes Motocross and Supercross, as well as three difficulty levels, which determines the number of laps to be overcome and the number of riders: Easy, Medium and Hard Against (player versus player) In Stage 1 and Championship modes, you can enter the Garage and adjust the suspension, brake to tire ratio, and other characteristics of the motorcycle.
Also, players will be able to improve the vehicle for money, in several directions: Motor, Brake, Suspension, Chassis.
The races involve performing tricks while jumping on trampolines, so before the competition you can familiarize yourself with two dozen tricks.
Having previously set the colors of the player and the motorcycle, you can start participating in the races. Basically, players will use the brake and throttle, which are necessary for basic motorcycle control, as well as occasional stunts in certain game modes.
To better orientate the player, yellow arrows appear in front of him in the air, which lead and indicate a sharp change in the track.
The most problematic moment is falling from a motorcycle, which gives a temporary head start to your rivals, as well as in case of a strong collision with an obstacle, the player can fly off the motorcycle and fly until it touches the ground.
‹
›
Home
View web version