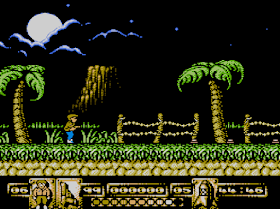 Genre: Action
Perspective: Side view
Gameplay: Puzzle elements, Shooter
Narrative: Spy / espionage
Published by: THQ Inc.
Developed by: Eurocom Developments Ltd
Released: 1992
Platform: Nintendo (NES)
Traces of atomic missiles were found on the islands and many of the best scientists were abducted. Only James Bond Jr. can save the situation. The game pleases with a variety: you can jump, shoot, solve puzzles, use the found weapons and objects (select + down). Scuba diving will help you get into the underwater parts of the levels. If you want to make a small jump, lightly press the button. Take care of atomic charges (white rocket icon), they will come in handy in levels 3 and 4, as well as in the battle with the main villain. The music is good, the style is reminiscent of Robocop 3. One of the most advanced games on NES.
‹
›
Home
View web version