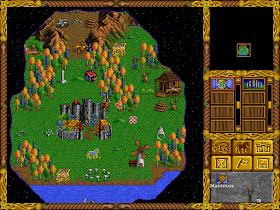 Genre: Strategy / tactics
Perspective: Bird's-eye view
Visual: 2D scrolling
Pacing: Turn-based
Gameplay: RPG elements, Turn-based strategy
Interface: Multiple units / characters control
Setting: Fantasy
Published by: New World Computing
Developed by: New World Computing
Released: 1995
Platforms: DOS, Game Boy Color (GBC)
What can a bunch of Heroes do where the fate of the world is being decided and whole armies are fighting? The Might & Magic series showed that a lot. But if you put the Heroes at the head of these very armies of fantastic creatures, you get a legendary game that spawned a whole series of sequels and set the tone for the entire genre for more than 10 years to come. Her name is Heroes of Might & Magic. 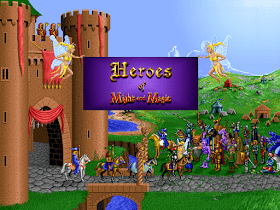 HoMM (a semi-official abbreviation of the name of the game), known in Russia as Heroes of Might and Magic or simply Heroes, is a turn-based strategy game released by the famous company New World Computing (NWC) in 1995. HoMM can be called the successor of another great work of the same company - King's Bounty. However, if in the predecessor you could only have one army under control (led by the protagonist), then in HoMM there is no such limitation. But after all, each army must have a leader, and the player cannot simultaneously be in different parts of his fabulous possessions. The famous Heroes from the Might & Magic series of role-playing games have come to the aid of you (and your rivals). Alas, apart from colorful portraits of old acquaintances, you will not find anything else in common with this famous series (the storyline and biographies of the Heroes shared with Might & Magic will appear only in the next HoMMs). But a good general is a skillful general, and it was decided to leave the system of recruiting experience for role-playing games. Battle-hardened Heroes will improve their characteristics, of which each commander has four: "attack", "defense", "power of magic", "knowledge". "Power" (might) characteristics are responsible for the overall effectiveness of creatures in the army of the hero participating in the battle. "Magic" (magic) - for the ability of the hero to witchcraft (the number of "instances" of each spell that he can remember, and their duration / damage). Each of the four classes (knight, barbarian, sorceress, sorcerer) to which the Hero can belong, in addition to their priorities in the development of the main characteristics, has some peculiarity. For example, a “knight without fear and reproach” is able to inspire his troops, and barbarian armies spend less time traveling over rough terrain (wild lands are home for barbarians).
However, the generals, despite the fact that they are called "Heroes", will not heroically give their lives for the prosperity of your fief. In HoMM, no voivode can exist without wide backs, behind which you can hide and give orders (even if under his command there is only one “back” belonging to some poor beggar with a pitchfork). All troops (with a few exceptions) are hired in towns and villages. They say that “every city has its own face”. In HoMM, this is true only for cities of different types (there are four types in total, according to the number of Hero classes). Fighting creatures are striking in their variety. If the “knights” have everything rather prosaic (pikemen, swordsmen, cavalrymen, etc.), then in cities of other types you will have access to more exotic creatures (trolls, unicorns, hydras). All of them are beautifully (and unconventional) drawn and animated (in general, graphic performance is one of the strengths of HoMM). I bet you have never seen such cute purple dragons or chubby brown orcs anywhere else.
The game takes place in two modes. The first is strategic. In it, each of the players (real or computer) hires creatures, develops cities and villages, moves Heroes with their armies, expands possessions. Somewhat unusual for the strategies of those years was the variety of building resources (in addition to gold, these are wood, iron, crystals, gems, sulfur and mercury). If to build a building you need exactly 5 units of sulfur, and you have only four, you will not be able to build anything even with unlimited reserves of gold: you will have to look for a pile of sulfur on the map or capture the corresponding mine. Battles take place in tactical mode (what King’s Bounty was loved for), where stacks of opposing squads' creatures also alternate.
Despite the fact that the goal of the vast majority of HoMM scenarios is complete victory over all rivals, a certain artifact of enormous power can be buried on the map - the legacy of King's Bounty. However, if finding the Scepter of Order in King's Bounty meant victory, in HoMM a buried artifact will only give one of your Heroes a big advantage in battle.
Of course, it is best to play this wonderful game with friends on separate scenario maps, but loners will not be offended - in HoMM there is a rather interesting campaign (sequence of single-player scenarios) in which you will be asked to bring one of four (again this magic number) lords to victory in a protracted war with the other three.
Can you recommend this game to a wide range of people? Of course! This is a fun, interesting, kind, beautiful and easy-to-learn turn-based strategy game. Many have become fans of the series from the wonderful second and third parts of "Heroes". I just want to say that as good as the sequels are, the first in the series remains unique. You will not find such large and unusually drawn creatures in any subsequent game, and the scenarios and campaign are not burdened with any "plot inscriptions" and the like. All this creates a special, very deep in its simplicity, fabulous atmosphere.
‹
›
Home
View web version