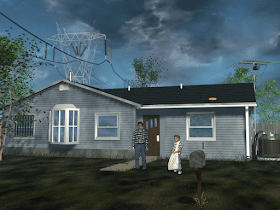 Swap CD only through existing LoadGame.
Genre: Adventure
Perspective: 3rd-person
Art: Full Motion Video (FMV)
Gameplay: Graphic adventure, Puzzle elements
Narrative: Horror
Published by: Merit Studios
Developed by: DigiFX Interactive
Released: 1996
Platform: DOS
Steve and Stephanie are out of luck. One fine morning they wake up in a small provincial American town named Harvest, Texas, somewhere in AD 195 ... with absolutely no memory of their lives up to that moment! They vaguely suspect that something is amiss - the parents are not real, all the inhabitants of the town, except themselves, are grotesque caricatures, and after a couple of days in the city, residents begin to die very quickly and extremely bloody ... 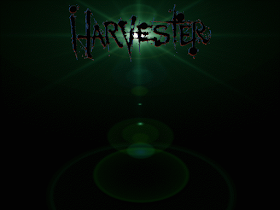 But this is the tip of the iceberg. Everyone in the town is run by a mysterious Lodge, which everyone strives to join, but those who join never leave its massive building in the heart of the town. Steve graduated from school four months ago, his wedding to Stephanie is scheduled in a couple of weeks, and everyone really wants him to find a decent job and join the Lodge too ... only he and Stephanie don't remember anything like that - no promises, no studies nor the inhabitants of this godforsaken place.
Nominally, the game is a point-and-click-quest with a pseudo-nonlinear plot (we can somehow influence individual events, but the Final itself has only two options, the choice between which we make right in front of it, this is where the freedom is over) and arcade combat inserts ... Yes, you heard right, in this glorious town you can try to beat (and kill) anyone. ANYONE. And whatever. As long as you don't get arrested for it.
The quest piece is simple - the left click on an object performs the action assigned to it, the right one tries to attack this object. I'll tell you in advance - the inventory is opened by clicking on the hero. The inventory is almost bottomless - the item icons are small, and even after collecting everything that can be collected in the game, you are unlikely to fill it up to half. It's unpleasant when you have to hunt the pixel in your own pockets ... although it's better not to think about how Steve manages to fit three thick books, a piece of meat, a fire ax, a fire escape, a pitchfork, a baseball bat, two screwdrivers in the same jeans .. . etc.
Combat is also relatively simple - you can steer Steve using both the mouse and the keyboard arrows to select a weapon, just right-click on this weapon in your inventory. Right-clicking in the right direction will cause Steve to hit (and Steve can hit up, down and straight - remember, this is important!). On the keyboard, Ctrl + arrows are responsible for the same moment. Some characters cannot be killed, some cannot be killed with impunity, some should not be killed in front of witnesses, and some will have to be killed. That's it.
Meanwhile, the plot and video sequence consistently blows away both Steve and you. EVERY inhabitant of the city (including Steve and Stephanie, although they simply do not remember it) is equipped with their deadly sins and terrible brain twists. Starting with Steve's mother, who bakes cookies from Monday to Friday, and, knowing that they will go bad, immediately pours them out of the oven into the trash bin. And bakes again. Stephanie's dad is obsessed with MEAT and eating it. And little girls. The city's fire department is staffed entirely by homosexuals who, on duty, paint pictures with naked men from life. Within the city limits there is a missile base with NUCLEAR ROCKETS, which is guarded by a legless paranoid soldier who suspects everyone that they are "bloody pink commies" and is ready to shoot the whole city. The morgue and the hotel are run by the same gentleman, who constantly wears a top hat and a tailcoat - and for some reason the list of guests coincides with the list of "clients" of the morgue one to one. Etc.
And on top of all this there is still a Lodge with its intrigues and "simple" secret tasks that must be completed in order to join it. Only when Steve begins to carry out these tasks, and people begin to die ...
The video sequence of the game evokes mixed feelings - all the characters were filmed and superimposed on 3D-rendered backdrops, the blood was shot in the manner of a trashy movie, the animation of the characters outside the clips is very limited, which makes the fighting scenes look ... squalid. Inside the cutscenes, all the actors are still terribly replaying - although this gives credibility to the grotesque nightmare that they show in front of us. The voice acting is at its best - starting with the wonderful play of intonations and madness in the speeches of the heroes and ending with the stylish music of that era (remember, in the courtyard of the 1950s), constantly sounding against the background of our travels.
Yes, the game is overwhelmed by masses of stupid bugs associated with non-work or complete loss when trying to get involved in a fight, but since it was banned in almost all countries in which it was released, patches for it, of course, do not exist.
Summary? If you like thoughtful, but bottomlessly gory movies with philosophical overtones, you should watch this. If you are interested in experimenting with video quests, you must watch this. Everyone else can look here for violence and cruelty - maybe you can endure something different. And yes, I repeat once again, if such a limit existed, the game would probably have been branded something like "from 21 to 40, the psyche and / or heart / stomach / eyes (underline as necessary) of everyone else may not be able to cope."
‹
›
Home
View web version