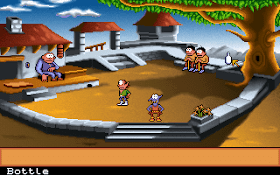 Genre: Puzzle
Perspective: 3rd-person
Visual: Fixed / flip-screen
Interface: Point and select
Setting: Fantasy
Published by: Sierra On-Line
Developed by: Coktel Vision, M.D.O.
Released: 1993
Platform: DOS
A terrible misfortune happened to the peaceful kingdom - the only heir to the throne, the young Prince Buffon, was kidnapped by the evil demon Amoniac, the embodiment of evil itself. The king is inconsolable, the court sorcerers, as usual, are powerless, the people are suppressed ... In such a desperate situation, only they - the goblins - can help the monarch! Fearless, carefree and ... often thoughtless, but always cheerful and determined to see their mission through to the end. As evidenced by the two letters i in the name of the game, this time we will have to manage two cute freaks, best friends Fingus and Winkle. Having received instructions from a wise wizard, this couple embarks on a long journey ... 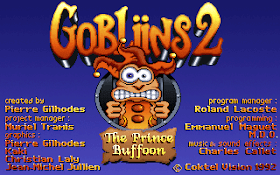 The gameplay has undergone significant changes in comparison with the first part - the incomparable humor and hilarious "goblin" jokes still continue to delight the player, but there is no more danger of careless actions to bring the charges to the grave, the clear division into levels has disappeared and a familiar system of "ubiquitous" saves has appeared. Both Fingus and Winkle can interact with objects and talk to characters they meet. True, the characters of these two guys are so different that you have to think carefully before deciding which of them needs to act in a given situation. If Fingus is a polite and quick-witted young man, then Winkle is more accustomed to a much more impudent and rude manner of conversation ("Hey, you, beard, tell us where to move, but live better! .."). The first one is able to operate with various devices and mechanisms (read, he knows how to insert the key into the keyhole), the second, on the contrary, cannot even be entrusted with some items - the honey obtained with great difficulty and necessary for solving a number of tasks, for example, he will not fail to gobble up before your eyes. However, we have yet to be convinced of the correctness of the saying “Impudence is the second happiness”. In the second half of the game, Prince Buffon himself will join the team - after all, he must somehow be taken home. And you still have to contend with the whims of the royal offspring ...
Gobliins 2 gameplay is based on the principle of "solve problems on the available screens and move on to the next." I must say that the puzzles in the game, although they can often make you laugh to the point of colic, can sometimes represent a serious obstacle due to their illogicality. For what reasons, for example, are we forbidden to drive a toad off a stone by other means than by sprinkling it with a stream of water? How does the sand from the clock create a bridge over the trench? Why can't you sneak past the sleeping giant blocking the passage, but you have to wake and feed him? But even if you find yourself in a hopeless dead end, do not despair - in many locations the so-called Jokers are available to the player - hints from the developers, opaquely hinting at what exactly we need to do. These tips by no means break the fine line between tips and direct instructions, so the pleasure of the game when using them does not diminish in the least. A large role is assigned to the use of the ability of the goblins to act simultaneously - while one presses the button, the second must stand on the platform, and everything in the same spirit. The main task of the player at such moments is to accurately calculate the time when it is necessary to give an order to the first subordinate, and when - to the second. Moreover, the most intractable riddles in the game are built precisely on this feature - it is so difficult to get Fingus and Winkle to work well together.
Irresistibly fun and reckless, Gobliins 2 will bring hours of genuine delight to all quest lovers. Without exaggeration, a classic of the genre.
‹
›
Home
View web version