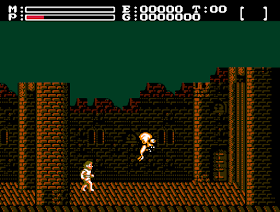 Genre: Action, Role-Playing (RPG)
Perspective: Side view
Visual: 2D scrolling
Gameplay: Metroidvania, Platform
Setting: Fantasy
Published by: Nintendo of America Inc.
Developed by: Hudson Soft Company, Nihon Falcom Corp.
Released: 1989
Platform: Nintendo (NES)
"Faxanadu" can be seen as a spin-off of "Xanadu: Dragon Slayer II" (released for PC-8801, PC-9801, MSX, MSX2, FM-7, X1, Sega Saturn and Windows), the second game in the famous series. "Dragon Slayer". The name "Faxanadu" comes from the merger of two names: Famicom and Xanadu.
The main character in the game is an unknown wanderer with no name (although in the Japanese version the name can still be chosen). The game begins when a character, after a long absence, approaches his hometown of Eolis and finds it in a very bad state, and besides, it is also practically empty. Even worse, the city is under the control of raging dwarfs. The elven king explains to our character that all these problems are due to the fact that the local fountain is stopped - the source of life for the entire city, and the sovereign also gives us 1500 gold coins to buy everything we need before going on a long dangerous journey.
As the plot progresses, it turns out that once elves and gnomes lived in harmony with each other near the World Tree, until one day a meteorite fell from the sky, and The Evil One appeared, who turned all the gnomes into terrible monsters and did not turn them against the elves. The Dwarf King, Grieve, nevertheless managed to swallow the magic sword before being turned into a villain himself. Having found and received this sword, our hero will be able to destroy the evil that has flooded the city and its main driving force - the Villain.
On our journey, we will visit four above-ground areas:
Our hero travels through the game locations screen by screen (there is no scrolling in the game), passing cities and dungeons, while he can walk, jump and climb stairs - all these are typical characteristics of a platform game. On the way, for gold coins, you can purchase various items, weapons, armor, and even magic projectiles. If you don't know what to do, you can always get additional information about events and goals, you just need to talk to the townspeople or consult with special characters.
In the upper part of the game screen, along with the scales of life and magic, there is also information about the experience, the amount of gold, the duration of the items (if they are not constant) and about the currently selected item. The defeated enemy usually leaves behind gold or life-giving bread, and the hero also receives a certain amount of experience for it. Sometimes enemies will leave behind special items that will help you perform specific actions (for example, a key to open a certain locked door). The game uses a password saving system, and the passwords themselves (or "mantras" as they are called in the game) can be obtained from the Guru in the churches. The gurus also give the main character ranks when he reaches certain experience points.
Although the game is made in the form of a platformer, but thanks to the use of a hero leveling system, a well-thought-out story, a thematic medieval world and interactive NPCs, many authoritative publications and sites classify "Faxanadu" as an RPG genre.
Faxanadu uses color palettes based on shades of brown, green, red and blue to give a natural atmosphere to the game's world of elves and gnomes. The game is somewhat atypical in this regard compared to other projects of its era, since then it was customary to use bright and cartoony graphics, but not gloomy gothic scales and tones. Likewise, the music of the game (and this is the work of Jun Chiki Chikuma) is made in such a way that very high quality conveys very deep and sometimes even frightening notes. From the urban rhythm of Eolis to the majestic melodies in the Elven King's throne room to those in the fortress of the evil The Evil One, all compositions are designed to create a special mood, while you can hear a lot of organic sound effects. The interior items and the appearance of enemies in the game are largely due to the mixture of Scandinavian and Japanese mythologies with derivatives of Eastern religions. They are somewhat reminiscent of the work of the famous HR Giger (Hans Rudolf Giger is a Swiss artist, representative of fantastic realism, best known for his design work for the film Alien).
The Japanese version of the game contains several Christian icons that have been removed in international releases for the US and Europe. On some of them, located inside the churches, you can even see the image of the crucified Jesus Christ.
Everything related to graphics and music has already been described above, both of these parameters deserve very high marks. The gameplay also deserves flattering words. In general, although many people call the game another "Zelda 2", but still "Faxanadu" deserves the right to a separate existence in the world of role-playing games. Believe me, the game is very unique and distinctive. I recommend to walkthrough!
‹
›
Home
View web version