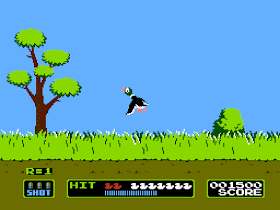 Genre: Action, Sports
Perspective: 1st-person
Gameplay: Arcade, Hunting, Shooter
Published by: Nintendo of America Inc.
Developed by: Nintendo R&D1
Released: 1985
Platform: Nintendo (NES)
The rules don't even need to be explained - wait for the duck to fly out, aim and shoot. The hunting dog mocks you with might and main when you miss. The game has three modes: shooting ducks one at a time, shooting ducks two at a time, as well as skeet shooting.
‹
›
Home
View web version