Cruise for a Corpse (DOS) 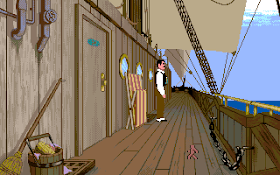 Genre: Adventure
Perspective: Side view
Visual: 2D scrolling
Gameplay: Graphic adventure, Puzzle elements
Interface: Point and select
Setting: Interwar
Narrative: Detective / mystery
Published by: Interplay Entertainment Corp.
Developed by: Delphine Software International
Released: 1991
Platform: DOS
What does a so-called "classic" detective need? Not so much: firstly, the crime itself (you can't do without it), secondly, an enclosed space (for example, some mansion on the Negro Island or, at worst, the Orient Express is perfect), and thirdly , a narrow circle of suspects, and each of them should have a skeleton in the closet (even better if there are several of them) and motives; finally, a brilliant detective is absolutely necessary, who will reveal all the secrets, find all the evidence and compare all the data, and in the finale triumphantly pokes his finger at the killer. The classic detective story as it is.
It was according to this recipe that the developers from the French company Delphine Software International - yes, this is the very company responsible for the appearance of Another World and Flashback - decided to cook their detective dish and in 1991 released the game Croisière pour un cadavre; a little later, the well-known Interplay Entertainment published its English version.
The plot of Cruise for a Corpse is neatly cut according to the patterns of a classic detective story: it features the murder of the wealthy Mr. Niklos Karabujan, committed on board a ship on the high seas; the circle of suspects is limited, and each of them had some complaints against the murdered; and then there is a detective with a cold mind and a fake mustache a la Poirot. He, under the strict guidance of the player, will have to tear off the covers from various unpleasant secrets and pull skeletons out of the closets.
The process of finding the killer of a millionaire is organized in exactly the same way as in other "point-n-click" quests: the hero wanders through very well-drawn locations, examines objects, from time to time combines them or does something else with them, well, leads long conversations with different - and also very well-drawn - characters - without it nowhere. It is worth noting that the controls in Cruise for a Corpse are quite convenient: there is no list of actions (go to, talk to, push, and so on) that can be applied to any object on the screen, which is traditional for "Sierra" quests of the same time. instead, clicking on a certain element of the furnishings calls up a list of actions that can be performed with it (for example, a note hanging on the door can be simply read, or you can carefully bend one edge of it and try to make out what is written on the other side of it - what if evidence). The map of the ship also helps the player, with which you can quickly move to various locations.
Perhaps, the relative originality of the gameplay of Cruise for a Corpse lies in the attention that the developers paid to the time factor (it is relative because the games were found over time in some of the earlier quests - in Colonel Bequest, for example). As the French detective finds evidence and receives new information, the clock hands move, and some locations can only be reached at certain times of the day.
To summarize, let's say that Cruise for a Corpse is a classic quest based on an equally classic detective story, and it must be to the taste of fans of the writings of Agatha Christie and Georges Simenon. It's a shame that Croisière pour un cadavre was Delphine Software International's only quest experience. They did quite well.
‹
›
Home
View web version