Alone in the Dark (DOS) 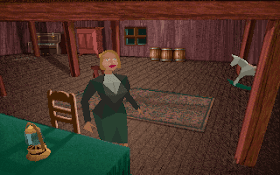 Genre: Action
Perspective: 3rd-person
Visual: Cinematic camera
Gameplay: Puzzle elements, Survival horror
Setting: Interwar
Narrative: Horror
Published by: I-Motion
Developed by: Infogrames Europe SA
Released: 1992
Platforms: DOS, 3DO Interactive Multiplayer
An addictive game based on the works of Lovecraft, the progenitor of the survival horror genre.
Strange rumors are circulating about things happening around the Derceto mansion, nestled somewhere in the vast expanses of Louisiana. So no one was surprised by the strange and eerie suicide of its owner.
The police didn't bother with this case for long, and the locals quickly forgot about it. The mansion remained uninhabited - at least at first glance. 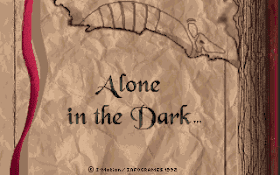 You are a private detective, Edward Carnby, who is hired by a collector to inventory the property of the mansion. Or, alternatively, you can play as the niece of the owner of the mansion, Emily Hartwood, who is just curious to know what really caused the uncle's suicide. But as soon as he (or she) crosses the threshold of the mansion, extremely strange things begin to happen. Something massive beats against the window, floorboards creak below, and there is no way to escape. There is only one choice - to go forward, to take a step into the darkness.
Most of the time will be spent solving puzzles and revealing the secrets of the mansion, although a lot of attention has been paid to the combat unit. Purely arcade elements were also added to the game, such as: passing the maze in a certain time or jumping on platforms, but they do not annoy, but only diversify the gameplay.
3D characters and 2D backgrounds, as well as a fixed camera, first used in this game, have become the standard of the genre for many years. Of course, polygons are devoid of textures, and their number in each character and object can be counted on one hand, but this does not prevent you from enjoying such an atmospheric game.
‹
›
Home
View web version