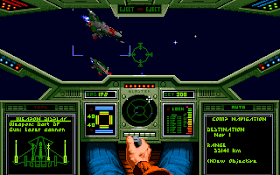 Genre: Action, Simulation
Perspective: 1st-person
Vehicular: Space flight, Vehicular combat
Setting: Sci-fi / futuristic
Published by: ORIGIN Systems
Developed by: ORIGIN Systems
Released: 1990
Platforms: DOS, SEGA CD / Mega-CD
2645, the war with Kilrathi, which began with the Iason incident, has been going on for twenty years. So far, the battle is on an equal footing, and the end of the war is not in sight. Race, very similar to terrestrial felines (Kilrathi - killers of rats, kill rat), extremely aggressive and not going to give up so easily.
You play the role of a promising Confederate fighter, who has just graduated from the flying academy with excellent marks and has been assigned to the Tiger's Claw ship. It is one of the most powerful Bengal-class aircraft carriers in service with the Confederate Air Force. Upon your arrival, the command of the ship was tasked with advancing into the Vega sector in order to lead the attack on the enemy.
The game features excellent graphics quality achieved by pre-rendered models of ships and planets. A large number of videos played between missions turn ordinary space into an interesting and exciting adventure. One of the nice features is that your fellow combatants have voiced dialogues that make the characters even more vivid and memorable.
In addition, the game has a rather branched mission tree, which allows you to go through the game differently each time, because it depends on the results of each completed mission what the next one will be. A pilot's career is directly related to your behavior in space.
‹
›
Home
View web version