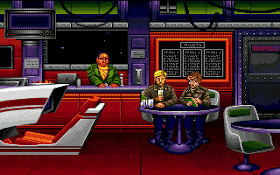 Genre: Action, Simulation
Perspective: 1st-person
Gameplay: Vehicular Combat Simulator
Vehicular: Space Flight
Setting: Sci-Fi / Futuristic
Published by: ORIGIN Systems
Developed by: ORIGIN Systems
Released: 1994
Platforms: SEGA CD / Mega-CD, DOS
A cosmic epic with a very worthy narrative. Aliens, known as the Kilrats, are trying to capture the galaxy. We must fight them, as a young pilot, and by all means help the human race survive in this confrontation. There are several plot twists in the game. The narrative of this epic is very atmospheric and it seems that we are part of the whole team of pilots, and those successful and not successful moments that occur affect the character more than in any other games. Right you enter his role!
The graphics for the Sega CD are normal. The backgrounds are simple, but they look very nice. All kinds of art, images perfectly set the desired theme. There are also videos that only improve the game. Sound effects, voice and music of an excellent level, all the components set the perfect atmosphere for the game, whether it be another mission or funeral of your pilot. This creation is pure pleasure! It's like you were really involved in a space war. The death of one of the members of your team makes you feel your imperfection, and the desire to perform tasks even better and to protect all comrades in the game is growing. Only first you need to get used to the management (and also to know which buttons are responsible for that, because the original came out on the computer where the keyboard was actively used for various actions).
There are several types of missions from patrolling to protecting the main spacecraft, etc. You can buy all kinds of other flying aids, from fast and weak to slow, but strong. The last missions are extremely difficult, as has already been said, everything here is real, it is a war for the whole planet and the salvation of mankind, and if we do not fulfill them, we will be defeated in this cruel battle. It's very difficult to see a good end, but when you achieve success, you will get real satisfaction and enjoyment. The game gives an unforgettable experience. Recommended for all fans of all sorts of space battles.
‹
›
Home
View web version