The Fortress of Dr. Radiaki (DOS) 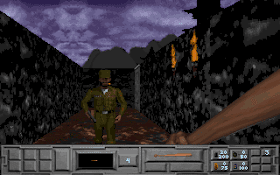 Genre: Action, FPS
Perspective: 1st-person
Gameplay: Shooter
Narrative: Comedy
Published by: Merit Studios
Developed by: Future Vision, Maelstrom Software
Released: 1994
Platform: DOS
Phenomenally little-known action, which absolutely no one remembers now.
The game has a plot: the evil doctor Radiaki, angry at humanity, which did not recognize his merits (he can be understood), in his fortress far from civilization, has slowly raised an army of super-strong genetic mutants, robots and just scum, and now he is not at all against using them to capture power over the world. Only our unknown hero can stop the madman. 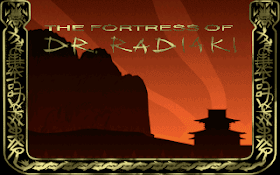 This game has a lot of interesting features - small, but pleasing. For example, our first weapon will be a baseball bat (...). Small arms require reloading, and the enemies here are what you rarely find anywhere: giant mutant alligators, robots with very strange heads (like microwave ovens), warriors that look like samurai and ninjas (who look like samurai - graphically made the best) ... In general, the game, despite the gloomy atmosphere, carries a rather big charge of humor, albeit black, it is very fun to play. True, what we call the word "strafe" cannot be done in the game.
The graphics in the game are practically the same as in the Doom series: slightly better than in the first part, slightly worse than in the second, the same 2.5D, the same special charm of * those * textures. When playing, you often get the impression that you are playing some kind of mod or unknown add-on to the greatest game of all time.
The verdict is very, very far from not just a masterpiece, but just a good game, but at the same time - and not entirely bad: there is atmosphere, and this is the main thing. It's nice that practically none of the publications that reviewed the game in the year of its release, despite not the most positive reviews, still called it "trash". So if you are looking for some rare action for DOS, then the game is a real gift and the best choice for you.
‹
›
Home
View web version