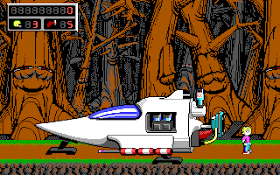 Genre: Action
Perspective: Bird's-eye view, Side view
Visual: 2D scrolling
Gameplay: Platform
Setting: Sci-fi / futuristic
Published by: Apogee Software
Developed by: id Software
Released: 1991
Platform: DOS
The first of a two-part episode 2, titled "Goodbye, Galaxy!" Billy finally defeated the vile Vortikons, who annoyed the earthlings so much in the first three parts, but now he has to fight even more dangerous opponents - Shikadi.
The graphics of the game have improved markedly, although the gameplay has not changed a bit. All the same journey across the map, giving a feeling of at least some non-linearity, all the same levels.
‹
›
Home
View web version