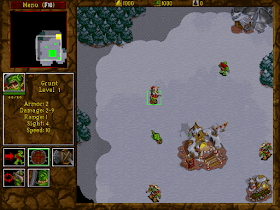 Genre: Strategy / tactics
Perspective: Top-down
Visual: Free-roaming camera
Pacing: Real-time
Gameplay: Real-time strategy
Interface: Multiple units/characters control, Point and select
Setting: Fantasy, Steampunk
Narrative: War
Published by: Blizzard Entertainment Inc.
Developed by: Blizzard Entertainment Inc.
Released: 1995
Platforms: DOS, PlayStation (PSX, PS1)
A new war is coming. Total war. The people understand that wherever they retreat, the orcs will follow them. The Orcish Horde called for help from allies: skilled trolls, mighty ogres and clever goblins. However, people have something to oppose this coalition. The wise elves of Quel'thalas and the unyielding dwarves of Khaz Modan came to their aid. A new war will be a world war. And it is clear that it will be conducted not only on land, but also at sea and even in the air. 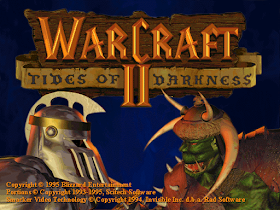 The player is invited to stand on one of the warring parties and lead it to victory in this bloody war. Moreover, you will have to fight with “your own”, since not everything is smooth in the ranks of the Alliance (traitors from Alterac), and the Horde consisting of clans is not so unanimous in its desire to exterminate people at all costs (Sorcerer Gul'dan seeks to gain power Sargaras, not giving a damn about the horde's targets).
Combining the fantasy world with the stunning playability of the grand strategy game from Westwood (Dune 2), Blizzard made a name for itself with the hugely successful WarCraft: Orcs & Humans. But in 1995, WarCraft 2 was released. Perhaps, in terms of playability and "people's love", this creation of Blizzard subsequently surpassed only its other product - StarCraft. WarCraft 2 is almost perfect. Graphics, sound, music, gameplay - all the components are great. The game is simply licked. "Riding" in WarCraft 2 with friends was the ultimate dream. By extracting 3 types of resources (gold, timber, oil), victory could be achieved using various strategies of warfare. What was the cost of the possibility of blockading the opponent by an early exit to the sea or burning the enemy with an airstrike of a detachment of griffins / dragons! Yes, in WarCraft 2, the opposing sides differ only in magic and appearance, but the whole point is that you don't want to pay attention to this. Even Command & Conquer, which has great capabilities, could not outshine WarCraft 2.
Summing up, it should be said that if there are masterpieces among computer games, then this is one of them.
‹
›
Home
View web version