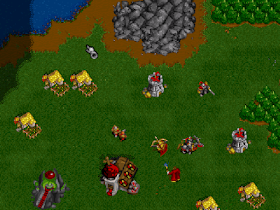 Genre: Strategy / Tactics
Perspective: Top-down
Visual: Free-roaming camera
Pacing: Real-Time
Interface: Multiple Units / Characters Control
Setting: Fantasy
Narrative: War
Published by: Electronic Arts
Developed by: Blizzard Entertainment Inc.
Released: 1997
Platforms: PlayStation (PSX, PS1), DOS
It's hard to imagine a PC owner who has not heard about Warcraft II. This stunning, strategic game has won the hearts of many fans, as well as a huge number of awards and prizes of various PC - magazines and publications. Now this "miracle" is at your service on the PSX! The level of the game remains as high as to satisfy the majority of players, and fans of "strategy" will not part with it for years! After all, the version on the PC remains one of the most popular, although it came out many years ago.
You start the game in the role of a man (a good guy) or an orc (respectively, bad). The strategic choice is great - 96 different scenarios, and you can play one of the impressive and dynamic campaigns. These "campaigns" seem to weave a great epic adventyure worthy of a Hollywood movie. Campaigns are borrowed from PC versions - the primary source of Warcraft II: Beyond the Dark Portal, which is a continuation of Tides. The PSX version has more levels (and campaigns) than any game of this type!
If you play "for people", then your task is to protect the "world" from the aliens from another "world" - orcs, who landed through the mystical portal. And, above all, you must build the base cities and defensive points around them in order to protect strategically important positions in your world. In the end, you are going to have to destroy the portal in order to permanently protect yourself from their invasion.
The next "human campaign" (from Beyond Dark Portal) takes you to the world of orcs, where you fight with them in their territory. You can play for orcs, and here the task is simple - to conquer the world of people.
Missions are very diverse. Most often you build bases, important fortifications and destroy all enemies. Sometimes the mission's goal is to establish (establish) a certain number of key structures, or to release important prisoners of war. Sometimes treacherous clans from the enemy camp can join you for their own mercenary purposes. In some missions, people and orcs fight side by side against a common enemy!
Success in WarCraft II depends on your ability to manage your troops and skillfully maneuver your limited resources. The main unit (peasants - people, peons - orcs) is also your resource. These little men build all your structures and structures. Including houses, which "produce" your military units.
You control your combat "machines", each of which operates in its own manner. Some can fly, others act like kamikaze, some attack better at close range - others from the far. To each character "from people" corresponds, almost equal to it on power of attacks and art of protection, the character "from orkov". So, Paladin'y confronts the Ogre-Mage orc. They, however, have different magical spells. Paladin - Healing and Exorcism, a Ogre-Mage-Bloodlust and Runes.
The video game option for PSX has two auxiliary modes: Up-grade and Auto-build. By introducing these modes, players are able to "facilitate" themselves the management of cities. For example, your barracks will automatically "produce" soldiers in accordance with your orders, just specify what type and how many fighters you need. And as long as there are resources and enough farms to provide them with food - there are no problems. True fans of strategic games may not have anything to do with it, but many fans, especially beginners, are of great help.
‹
›
Home
View web version