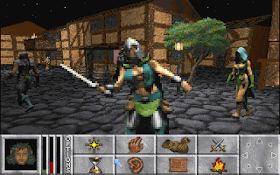 Genre: Role-Playing (RPG)
Perspective: 1st-person
Gameplay: Action RPG, Sandbox / open world
Interface: Direct control
Setting: Fantasy
Published by: Bethesda Softworks LLC
Developed by: Bethesda Softworks LLC
Released: 1996
Platform: DOS
A first-person action RPG with a slightly different concept. Some consider this game the greatest RPG of all time, while others, on the contrary, after a few hours of playing in a rage, erased it. A distinctive feature of the game also became a huge number of shortcomings, for which the people even nicknamed the game Buggerfall. But it is definitely worth playing.
Worth at least for the shock of the first hour. Generation of a character, which is carried out either by polling (a number of multiple-choice questions are asked, by which the class and characteristics of the character are determined) or manually. Moreover, you can create your entire class, choosing from a huge number of skills, advantages and disadvantages. Why, you ask, choose disadvantages? The point is that there is a certain complexity counter. The higher it is, the more powerful monsters you will come across. So, where a hero who has not chosen expensive magic immunity meets only rats, a hero with a higher difficulty scale runs the risk of facing orcs.
The approach to the combat system is surprising. Holding down the right mouse button, you move it, thus choosing one of eight types of impact.
The characteristics of a weapon largely depend on the materials from which it is created. It is worth noting that many monsters simply cannot be damaged by some materials. Having reached certain heights in magic, you can also give the weapon certain magical abilities.
The first dungeon may seem huge to you. But this is not the case. After getting out of it, you will realize that, compared to the scale of the world, this dungeon is simply negligible. And the world of Daggerfall is incredibly huge. There are many provinces in it, and each province has an incredible variety of cities. But not villages for three huts, which you probably already saw in many RPGs, but real villages and cities, with many houses, shops, guilds, temples, banks, taverns and just the most ordinary buildings, the number of which is only in one city very often over a hundred. Larger cities are walled and have gates that close at night. But you can easily fly over the wall if you have such a spell in your book.
Real inhabitants roam the city, each (!) Of which has a unique name. Each of them can be asked about the whereabouts of certain buildings or famous personalities in this city.
During your travels, you will surely join one of the many guilds. Each guild requires a certain minimum of some characteristics to enter. For example, in the Mages Guild, you will need knowledge in one of the magic schools. For a career in the guild that will open up new opportunities for you, you need to raise two things: the minimum characteristics and your status in the guild.
To begin with, a little about the characteristics, or rather, about raising the levels. You will not find such a Level Up button in Daggerfall, which is familiar from the AD&D system. Instead, at the beginning of the game, you will be asked to divide your character's skills into three groups. Leveling up requires all skills in the main group and a few skills in secondary groups to rise to a certain value.
The growth of the status is made by completing tasks in the guild. Tasks usually boil down to traveling to a certain dungeon and killing someone there, or finding a certain item. These dungeons are the thing that scared most people away from this game. Most of the dungeons (except for story ones) are generated independently. But their size and complexity simply defies description. The situation is aggravated by numerous bugs and bad design. Let's say the exit from the dungeon is indicated by an initially unobtrusive texture representing a door.
But, as I said at the beginning, this game is definitely worth playing. Especially in the light of the continuation. And in order to feel real freedom. And think about whether we need it like that.
‹
›
Home
View web version