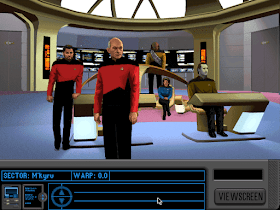 Genre: Adventure, Strategy / tactics
Perspective: Bird's-eye view, Side view
Gameplay: Puzzle elements
Vehicular: Space flight
Setting: Sci-fi / futuristic
Published by: Spectrum Holobyte
Developed by: Spectrum Holobyte
Released: 1995
Platform: DOS
A game based on the science fiction series "The Next Generation" of the Star Trek franchise, which is an interesting hybrid of adventure and space strategy-simulator, with the first component prevailing.
The beginning of the events of the game is the arrival at the Federation border post (here it is worth noting right away that it will be difficult for people who are not fans of the series to play this thing, since much will be simply incomprehensible), where the famous USS Enterprise headed by Jean is located. -Luc Picard, a small ship of the Garidian nation, recently joined by the Federation. Enterprise is sent to intercept the ship, whose crew claims they are simply off course. Suddenly, a Garidian cruiser appears on the horizon, demanding from Enterprise not to help the fugitives, and then completely "removing" disguise and turning out to be the ship of the main enemies of the Federation - the Romulans ... 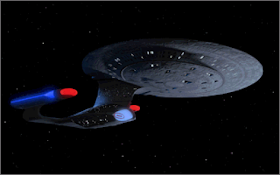 Actually, there is no point in revealing the plot of such a game - it is enough to say that the adventure will be noble, exotic, juicy and in the best traditions of ST. But the genre of the game is positively impossible to define - the developers have combined too many different elements. For example, before starting each mission (and the game is divided into missions), it is necessary to make a "party" of characters from the ship's crew members who will participate in the unfolding adventure - but this is generally limited to the role-playing element. Most of the game is a "party" quest with a third-person view, divided into stages, in each of which the Enterprise team in one composition or another must solve some problems, moreover, most often - on the surfaces of not very friendly planets or in others similar places. Control in this game mode is carried out with the mouse, according to the principle of "point and click", and the riddles are based almost exclusively on the search, taking into the inventory and the subsequent use of various objects, and what kind of characters are chosen for a specific mission sometimes still affects the success of its passage. There are dialogues between the characters, which differ, again, depending on the selected characters, but they do not have much significance.
The strategic part has been significantly simplified: in it you have to control the ship, repair its various systems in time if they are suddenly damaged (this is already a more significant and complex part), and also manage tactical battles with spaceships in pseudo 3D mode (which is actually not too difficult and interesting, but the game is the most difficult element). However, in Final Unity there is a setting of difficulty levels, and at the easiest - probably for those who like quests - it is possible to transfer control of all battles to a computer, focusing on the adventure part (however, it is not recommended to play in this mode, since a solid part of the atmosphere is lost games). Another difficulty setting is allowing the computer to automatically select the most optimal lineup of team members before starting a specific mission.
The graphics are superb - perfectly rendered backgrounds, digitized sprite figures of real actors who starred in the series, really diverse locations - from jungles and caves to gorges and technocratic dungeons. Add to this FMV scenes, portraits, photographs during dialogues (provided that those with whom you speak are at least somehow similar to people - and this will not always be so), voice acting from the actors of the series and, of course, thick atmosphere of "Star Trek", which, believe me, is present in this game. Although I have to repeat that the mixing of genres still did not go to the benefit of Final Unity, but to understand the plot and all the charm of numerous references and small details, in order to understand the beauty of what is happening, you need to at least somehow be familiar with the world of this universe. For fans, the game will be, without a doubt, a wonderful and, we hope, a welcome gift.
‹
›
Home
View web version