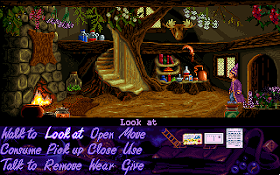 Triple click on the compass to skip copy protection screen.
Genre: Adventure
Perspective: 3rd-person
Gameplay: Puzzle elements
Setting: Fantasy
Published by: Activision
Developed by: Infocom
Released: 1993
Platform: DOS
The story begins with Simon, a normal pre-teen who listens to music while reading some magazines in his room. His new dog "Chippy", who was a gift from his recent birthday, discovers a trunk in the attic of his house with a book of spells. Simon goes to take a look but throws the book on the floor showing no interest in its contents. Then an impressive beam of light comes out of the book. The dog passes through it and Simon follows.
After going through it, Simon finds himself in another world. After escaping from trolls, he discovers that he has been called in to rescue the wizard Calypso from the clutches of the evil sorcerer Sordid.
The game includes numerous parodies of various folk tales and fairy tales, including Rapunzel, The Lord of the Rings, The Beanstalk, and The Three Male Goats Gruff.
‹
›
Home
View web version