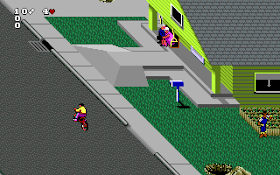 Genre: Action
Perspective: Bird's-eye view
Visual: Isometric
Vehicular: Bike / Bicycling
Published by: Mindscape
Developed by: Tengen Inc.
Released: 1991
Platforms: DOS, SEGA Genesis / Mega Drive
Continuation of the game Paperboy, released on the PC three years after the release of the first part on it and, in my opinion, surpassing the original in all respects.
The essence of the gameplay remains the same: we ride a bicycle and deliver newspapers around the city to those houses that have a subscription to newspapers, in conditions of limited time, facing a variety of enemies and obstacles.
There are several differences from the original. First, we can now choose a character for ourselves - either a boy or a girl. Secondly, now we have real enemies: people throwing something at us, and some strange creatures like ghosts. Everything else - cars, skateboarders and passers-by that can be encountered, workers dragging something or repairing the road, open hatches, angry dogs - are also in place.
Thirdly, the graphics of the game have improved dramatically: now you don't want to look in any other direction in terms of platforms, the oldgamer doesn't need more. And the world of the city itself has become more diverse: more interesting various buildings (including even Gothic castles!), Much more sound effects ...
This game is a great example of the fact that the sequel is not always worse than the original. Having retained all the charm of the first part, the game world of Paperboy 2 sparkled with new colors, becoming only better from this and coming close to the status of one of the best arcade games ever released. This is a living classic, like the first part, highly recommended to all nostalgic.
‹
›
Home
View web version