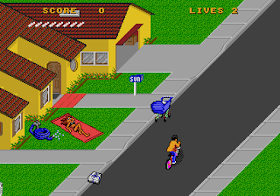 Genre: Action
Perspective: Bird's-eye view
Visual: Isometric
Vehicular: Bike / Bicycling
Published by: Tengen Inc.
Developed by: Tengen Inc.
Released: 1992
Platforms: SEGA Genesis / Mega Drive, DOS
This is the continuation of the game Paperboy. You are again a newsboy, this time you can choose a character. The goal is still to smash the newspapers. We'll have to scatter newspapers in different directions and thereby harm others, because the newspaper behaves like a shell. Knocks out glass, breaks through walls, crushes graves and knocks down people and zombies.

The player can decide whether to be a distributor or distributor of newspapers. The videogame will give us a map on which to distribute the newspapers on our bicycle and we will face different and strange obstacles. At the end of the game we will see the cover of a newspaper with different news on the first page that will vary depending on what we do in the game.
‹
›
Home
View web version