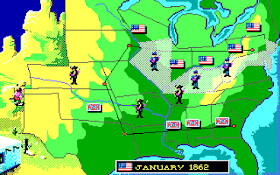 Genre: Action, Strategy / tactics
Perspective: Side view, Top-down
Gameplay: Wargame
Setting: Historical events
Published by: Data East USA
Developed by: Infogrames Europe SA
Released: 1990
Platforms: DOS, Nintendo (NES)
North & South - strategy on the U.S. Civil War. You can play both sides - North and South.
The game takes place very rapidly, first move on the strategic map of the army and seize territory in turn-based mode, then, if in the same area there are several armies, the battle begins.
Battle going on here is very unusual - in your submission are several types of troops (cavalry, guns, infantry), at the same time can only manage something one (the rest are waiting for - to defend themselves, they will not, even if they will kill). Smartly switching between troops need to destroy the enemy (which, incidentally, is played by the same rules, and if, for example, you go infantry, his guns are silent).
Cavalry owns fast attack - sabers unsheathed, infantry moves slowly, but good shooting and gun (if they skillfully use - it's just a local super-weapons) can not only destroy everything in the line of fire, but also to destroy the only bridge across the river (though Unlimited number of shells). 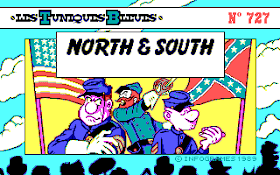 The goal - to destroy all of the enemy army. New troops can be obtained by railway: every move the train passes over it and gives you some gold - depending on the number of areas in which the railroad passes and which adorns our flag. New Army worth 5 sacks of gold (if capture Carolina reinforcement can also be obtained on the water).
The train can attack the bandits - have to defend him at this stage the game turns into a classic arcade game, the goal - running through the train, kill all attacking (if you put your army in the way of enemy trains - you can capture valuable cargo).
More like a mini-game there during the attack on the territory where there is a fort: The goal - to reach the end, fighting along the way from hostile soldiers, avoiding dogs and explosives before the time runs out, and raise its flag over the fort. Bad weather will not move troops and Indians and Mexicans can destroy the frontier army.
In general, a true masterpiece in 1990 - one of the first RTS, and this part of the history of computer games.
‹
›
Home
View web version