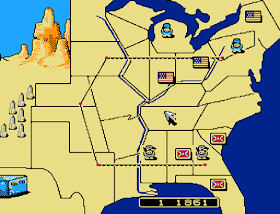 Genre: Action, Strategy / Tactics
Perspective: Side view, Top-down
Gameplay: Wargame
Setting: Historical Events
Published by: Kemco / Seika
Developed by: Infogrames Europe SA
Released: 1990
Platforms: Nintendo (NES), DOS
A pretty bouncy strategy for NES about the civil war in America. The game is quite easy to understand, as for the representative of the genre of turn-based strategies. To do this, you can first choose only computer opponents and they will fight with each other. In the game, in addition to the global map, there is also a combat map in which the player can give orders to his troops and build them in the proper battle order to wrest victory from the enemy. On a global map, you can build. The main goal of the game is the complete destruction of the opponent.
‹
›
Home
View web version