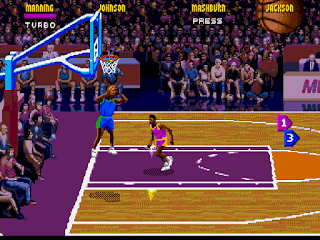 Genre: Action, Sports
Perspective: Side view
Visual: 2D scrolling
Gameplay: Arcade
Interface: Direct control
Sport: Basketball
Published by: Acclaim Entertainment
Developed by: Midway Manufacturing Company
Released: 1995
Platforms: SEGA Genesis / Mega Drive, SEGA 32X, Atari Jaguar
Legends were made about this arcade basketball simulator. During the development of the game, due to platform limitations, the number of players had to be reduced, but this game can be played by four! A wise decision as it was quite popular in those days and the game was ported to other platforms. The main programmer was Steve Snake, better known as the author of the Kgen, Kega emulators.
This is two-on-two basketball and you don't need to be distracted by such trifles as fouls and the laws of gravity. However, playing this game is more than enjoyable, I enjoyed it! In my opinion, this game made the same revolution in basketball simulators as WWF Wrestlemania Arcade in its genre!
NBA Jam (1993, original, albeit slightly limited port with arcade machines, naturally, not without the participation of legendary NBA player Michael Jordan),
NBA Jam - Tournament Edition (1994, has more teams and hidden players)
College Slam (1996, slightly expanded version of the NBA JAM TE, sanctifies college tournaments and is the best in the series)
This game was ported to almost all platforms in the late 1990s.
‹
›
Home
View web version