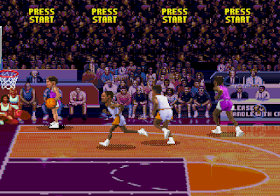 Genre: Action, Sports
Perspective: Side view
Visual: 2D scrolling
Gameplay: Arcade
Interface: Direct control
Sport: Basketball
Published by: Acclaim Entertainment
Developed by: Midway Manufacturing Company
Released: 1995
Platforms: SEGA 32X, SEGA Genesis / Mega Drive, Atari Jaguar
The game is an improved version of the NBA Jam game. In this version, even more teams have appeared, many different chips and secrets, the so-called easter eggs, which players love so much. Including characters from Midway's Mortal Kombat game. An unusual feature is the large heads of the players. Perhaps made for clarity, so that it would be easier for the player to recognize this or that player by the face. The NBA Jam Tournament Edition was developed by Steve Snake himself, now known as the creator of the KGen 98 emulators and later Kega Lazarus / Fusion.
‹
›
Home
View web version