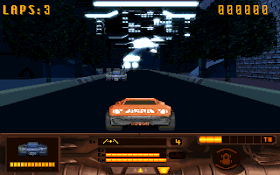 Genre: Action, Racing / driving
Perspective: Behind view
Art: Video backdrop
Gameplay: Shooter
Vehicular: Automobile, Track racing
Setting: Sci-fi / futuristic
Published by: Software Toolworks
Developed by: Cryo Interactive Entertainment
Released: 1994
Platforms: DOS, 3DO Interactive Multiplayer
In the distant future, when all the entertainment of modern civilization bored, people found a new brutal fun - "Mega Race", racing in the "virtual space". "Virtual Space" - a world created by a giant computer and projected onto the consciousness of the races. Each of them receives from the computer synthesized set of sensations and sees himself in a powerful armored car, armed with modern tools of destruction - missiles, lasers, etc. Machines are involved in a deadly race on the track, laid in the most unusual circumstances. connected to the same computer, the audience watching the progress of the race. viewers to get the most thrills on the track racing there, "entertainment" in the form of urban gangs in cars, robots, programmed by firing moving around, and much more. To win the "Mega Race", you need to destroy all rivals on the track, first of all - the leader, any way you like. Machines competitors can shoot, break to pieces on the board, and no one could blame you for unsportsmanlike conduct on the contrary - the transfer will receive a higher audience rating, and this transfer to the organizers. By the way, to continue the race, it is absolutely necessary to deal with all the competitors and stay on the track alone. It would seem that the race is safe for participants. Well, shattered car on the flaming wreckage ... 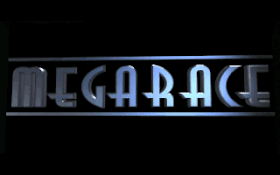 Remove the helmet - and all right? No, it's not that simple. The neurons of the human brain can not withstand such overloads, and several "virtual death" lead to one, but the most common. To the participants of the race was more interesting, the administration does not tell them how much "virtual death" they will be able to survive. "Mega Race" - not a simulator, so you'll see happening is not out of the cab car, as it were, from behind. Unlike many games with races in the "Mega Race" is necessary not only to shoot at opponents, but also to follow the route. Scattered on the track and icons, and, having passed over them, the car can receive additional benefits, such as a sharp pulse velocity or additional weapons. There are also "bad" badges, braking the car or breaking her control. This focus is taken from a simple "micro-car racing." On the plot is more or less clear, it is time to pay attention to technical detail. "Mega Race" strikes a unique realism and quality of the generated image, particularly in the stunning scenery of the "virtual space". They are very diverse, and here the night megalopolis, and blue, the planet covered by water, rocks and desolate planet, specialized in mining ... The picture quality just does not leave much to be desired. All views were synthesized in advance for heavy-duty graphics workstations and on a CD-ROM in the form of a film, so directly during the race time is not spent on the synthesis. The game is full of inserts "real video". This applies mainly to training, where it participates dashing showman, host of "Mega Race". This tall, skinny and nervous type has a very peculiar sense of humor, for the most part - pretty black. His monologues delivered to the player a lot of fun minutes until these jokes and their consequences will not touch it personally. A player can not choose a particular structure of weapons for his car, but you can choose among several given advance models of cars. Machines are different armament, speed and armor level. However, if we remember that the icons on the highway can help compensate for the weaknesses of the machine, it turns out that even poorly armed or slow-moving vehicles likely be sufficient.
‹
›
Home
View web version