I Have No Mouth, and I Must Scream (DOS) 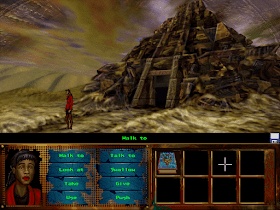 Genre: Adventure
Perspective: 3rd-person
Visual: Isometric
Gameplay: Puzzle elements
Setting: Cyberpunk / dark sci-fi
Published by: Acclaim Entertainment, Cyberdreams
Developed by: Dreamers Guild
Released: 1995
Platform: DOS
Based on the novel of the same name by Harlan Ellison, I Have No Mouth, and I Must Scream is one of the darkest quests of all time. The oppressive atmosphere does not let go until the very end.
Near future. Three superpowers, the United States, Russia and China, each striving to surpass their rivals, have created supercomputers to wage war. But they miscalculated. Having united into a single whole, calling itself AM, three supercomputers, using the power given to them by people, wiped out humanity from the face of the earth. The computer leaves only five alive, who will serve as toys for endless torture.
For each of the five survivors, AM comes up with his own hell, which has neither end nor edge. But over time he gets bored with it, and he invites five to play a game with him. The winner will be released. But to win, everyone will have to overcome their deepest fears.
You can choose which of the characters to start playing as, but in the end you have to go through all five scenarios. You can choose from: hysterical Ellen, paranoid Ted, sadist Nimdok, Gorrister, who blames himself for the death of his wife, and Benny, who was brutally bullied in the army.
The gameplay is nothing special. The puzzles can hardly be called too complicated or interesting, but in this game this is not required of them, everything here is left to the mercy of the atmosphere.
The graphics, in my opinion, are nothing special, although too dark backgrounds sometimes interfere with the search for objects.
The controls are quite intuitive - first, an action is selected from the list, then the object on which this action will be performed.
Quest for an amateur. But if you like games with a dark atmosphere and a good plot, with a touch of psychology, then you should definitely play.
‹
›
Home
View web version