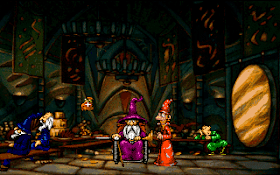 Genre: Adventure
Perspective: 3rd-person
Gameplay: Graphic adventure, Puzzle elements
Interface: Point and select
Setting: Fantasy
Published by: Psygnosis Limited
Developed by: Perfect 10 Productions, Teeny Weeny Games
Released: 1995
Platforms: DOS, PlayStation (PSX, PS1)
A series of novels «Discworld» sold in the United States and the United Kingdom with a total circulation of 12 million copies. Its author , the eccentric Englishman by the name of Terry Pratchett , came up with the world is round and flat as a pancake that is floating in space on the shell of an enormous turtle , and peopled it to be extremely strange creatures . Part of the world -ROM parodies some cliche of post- Tolkien fantasy novels , but this , of course , the idea is not reduced . Pratchett boundless ingenuity , humor and the most amazing way combines the warmth and easy cynicism . 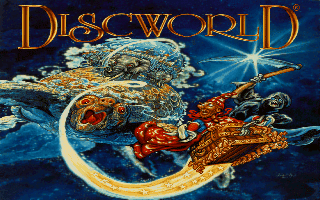 The game begins in the city of Ankh- Morpoke - one of the most famous places where the action is a series of novels «Discworld». This city is described as "... just as full of activity and a thriving business , like a dead dog on a termite mound ." Somewhere in hiding malicious and a fire-breathing dragon , he eats the local population and setting fires . To find and defeat him, clearly needs a hero. The situation is complicated by the fact that , according to the authorities , the dragons do not happen in nature , therefore, no need to deal with them - and the change in the official point of view can , God forbid, lead to an undesirable drop authority bosses. Those wishing to show heroism is not , and the Rector of the University of magicians appoints to the post - dropout wizard Rincewind - it is very likely that in this case he does not think so much about how to rid the city of the dragon , and the fact that most to get rid of the burden .
As with all adventure games , here you have to walk a lot, talk to other characters and explore new places . It is also necessary to collect information and magic (and common) items - gradually going to have a considerable pile of Rincewind pozhitok . Fortunately, he is accompanied by a reasonable and a roomy trunk with legs - Porter , who can even stand up for his master in case of danger.
The style of graphics «Discworld» adventure game reminiscent of some of the company «Sierra» - animation or comics , but with a great sense of style. Without a good knowledge of English will remain the humor beyond the perception of the player , and therefore , the program will lose almost half of its charm.

The game interface is 99 percent is based on the use of the mouse. When you move the cursor on the screen next to the active objects ( objects , creatures , etc. ) there is the name of the subject - so you can distinguish between active objects from the usual design elements . The mouse buttons are the standard cursor ( that is, without the use of selected subjects) are assigned as follows :
- A single click of the left mouse button - move Rin svinda to the specified location . The same action , but directed at the very Rincewind or Porter , has a special meaning - a window opens with the objects that are available to the character ( of the system works with objects - see below);
- Single right click of the mouse - to provide information about the object, a brief description or a more detailed discussion ;
- Double click the left or right mouse button - to perform any actions in the game , depending on the selected object.
As the game Rincewind acquires , as mentioned above, is quite a decent amount of things. Thus he can carry very little - the main storage becomes Porter . Calling the box with items that are in it , you will , if necessary , you can change the size of the screen, " ottaskivaya " the limits of its scope , using the cursor and pressing the left mouse button. If the window is only shown in part of the subjects , the scrollbar it appears on the right point marker . By moving it up or down , you can access and invisible at the moment subjects. To further explore the right thing , located among other property , or to make it some kind of action , use the same mouse clicks , as well as for active screen objects . There is only one "but" - single left click selects the object to be used on the Home screen or in the property . When you click outside the window of the property window closes and returns you to the game .
The remaining 1 percent unmentioned interface has the key F1, opens the user menu with a standard set of functions to save the game , restore , exit to DOS and configure game settings.

The Adventures of Rincewind start with his room. Open the cabinet and take out the bag. Exit the room and find ARCH CHNCELLORS ROOM, talk to him. In CLOSET grab a mop . Return to the room and mop Rincewind wake Porter (inside is a banana) . Go to LIBRARY and give the banana to the librarian, then you will get in return for his " Guide to finding the dragons ." Take this guide Chancellor . Now you have to collect 5 items for the construction drakonoiskatelya . In DINING ROOM will substitute mop stick sleeping magician. In this case the University is temporarily out - it's time to visit the city . Exit the tower and talk to the gatekeeper , ask him a question . Take a frog and open the gates to the city.
On a map of the city you should find the following places : Tavern «BROKEN DRUM», PALACE, PARK, INN, UNSEEN UNIVERCITY, ALLEY, LIVERY STABLE, CITY GATES, SQUARE and STREET.
Go to the area , take the pan with the tomato and fling him into a man in the stocks . Take another tomato and catch the worm on the ground . Speak with a street thief to have Rincewind appeared skill theft, but at the same time , and practice in the new art . Go to a psychiatrist , get out and go again. If the troll closes back butterfly net for butterflies come in, do not troll until peresyadet - you definitely need to pick up this loafer .
On the Street , visit the toy store . Take the rope and a toy out of the box . Tie a rope to the worm . Next to take a picture of a fishmonger . Go to the barber shop , a couple of times to talk to a lady , then - with the hairdresser . While the barber will stand and dreaming , steal from his pocket twist hair (you do not just take and steal it !)
We take the Stables of the bag seed.
Near the palace to talk with a high guard and ask him a question. Enter the palace , go to the bathroom and take a mirror. Put it in the property Rincewind , not Porter .
In the Alley step on a stone that will throw Rincewind on the roof. Look for the background a high tower , and go there . Attach the mirror on the tip of the flagpole and stir it once - the mirror absorbs the dragon's breath . Again return to the roof and go left until you find a ladder draped between rooftops . Click on it to Porter picked up at the bottom of the ladder and added it to his property . To come down to earth , get in the box . Your business in the Valley is not over yet . Go right and enter the door . Look on the box, click on the bulb - shutter. Place the corn in a flask and free midget double click - ungrateful hide in a mouse hole . Exit the house and run the alchemist in a worm hole on a rope to catch a midget .
The bar «BROKEN DRUM» talk first with a funky guy who kept hiding under the table , and then - with the bartender . Take a mug and matches.
Enough feats , it's time to return to the University . Walk around the building along the path and take a bag of fertilizer . Put a scoop net assets Rincewind each side, a ladder to the window and catch a butterfly net flying pancake at the top of its flight.
Go to the pantry and matches light the lamp , take off the shelf package with starch . In the kitchen, grab a banana and a frying pan . The library approach the suspicious type, which from time to time turning his head with a banana in your ear. Talk to him about the banana.
Go to the room and give him the Chancellor pan , twist hair , midget , staff and dragon breath in the mirror.
When you see the map of the city , keep Rincewind with dragon - oiskate Lemma down and to the left - on the approach to the dragon flicks are becoming more frequent. When you finally find the dragon , look a little movie and keep his exploits...

On the square take the lady Ramkin key. Go to the nursery and its key open cage with dragons. To get around huchu manure on the floor several times try to pass it - though not the first approach, but it is you, in the end, turn out. Take the dragon Mambo. Go back to the area and "use" Mambo at the dragon. Give him a burning fireworks and "use" again. Finally, to finish the game, Dragon ugostite privorotnye gratin.
Ah, yes Rincewind, really, still won? It is not believed... And for good reason...
‹
›
Home
View web version