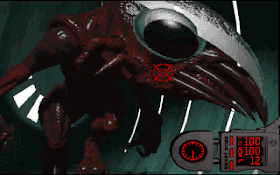 Genre: Action
Perspective: 1st-person
Gameplay: Rail shooter
Art: Video backdrop
Setting: Sci-fi / futuristic
Narrative: Horror
Published by: Virgin Interactive Entertainment
Developed by: Argonaut Software Ltd.
Released: 1994
Platforms: DOS, 3DO Interactive Multiplayer
Events depicted in the game, begins in 2123 during this period of humanity, it is concerned about the lack of living space on Earth due to its overpopulation begins to develop other planets. Among other possible relocation sites selected and Saturn with its terms, Tami-satellites. Spaceships are sent to the depths of space to explore and, presumably, the development of new places of life. One of these ships, «Amazona», under the command of Captain bags, slim beautiful girls, also went to the reconnaissance flight. All went well, as planned, until the ship reached the moons of Saturn, where radio ended abruptly. Fortunately, radio beacon, thrown for a moment before death gave leadership spaceflight on Earth some information about the last minutes of the ship. Videotape obtained by the ground station, testified that the cause of the disappearance - contact with a huge ship or something else related to alien civilization. 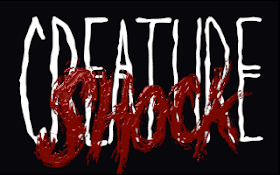 Mission Control Center do not know exactly, but we'll see that «Amazona» hit the tentacles of a huge, suddenly revived asteroid. What was it - the space station or the unseen monster mutant - is still unknown.
By the way, the crew was killed, and bags, according to the initial introduction, can, and live. That's just where it is, no one is clear.
In "Creature Shock" you - Commander Barr, a brave pilot scout who Admiral face maniac - a serial killer, requests to investigate everything that is connected with recent sad events in the "Amazon".
Let's briefly interrupt the narrative to explore the game menu and control system.
Main menu unusually brief.
PLAY - Begin the next mission. First you have to choose the difficulty level of the three: EASY, MEDIUM or HARD, and then run MISSION - the start of another task. The game is not the current state of the recording mode. But after the completion of the next level, you have access to the next mission (its name appears in the option MISSION) or can replay any previous selecting it from gradually progress through the story, fill out the list. To do this, click on the menu PLAY.
OPTIONS - Presets game. It's very short - the volume of music and special effects alone.
QUIT - Exit to DOS.
On the control we describe later, when I talk about the first two missions, as long as we give a list of "hot" buttons:
P / PAUSE - pause the game;
ALT + Q - output in DOS;
+ / - Reducing the size of the game screen. There are five modes, specify if you wish, but only works in levels, where the flight in the spacecraft;
T - Change the structure of the image (only for the third
missions);
SPACE - SMART BOMB - the bombs - your most powerful weapon. I only wish that they can be used only three times on the level;
M - on / off music;
S - on / off effects.

At a briefing before you set specific task; spend scout craft «Tellute» through deep space, and try to get to the "Amazon". Safety sensors to alert you to the presence of foreign objects around you. Carefully fly and avoid collisions with these fragments of asteroids. Sensors studies indicate the presence in the execution of the job a considerable number of "foreign" objects. Your fighter has two plasma cannons «Wolff» and a shield that absorbs energy. This gives you enough protection and offensive power to an end.
And then, finally, you're in space.
Just note that nothing much more than that, just wondering, the game in this mission of itself is not. Beautifully drawn, but, nevertheless, a banal space shooter with vvdom your ship back.
Control is performed with the mouse. With the help of the ship, still own fly forward, moves around the screen, dodging asteroid fields, enemy mines, energy and magnetic traps, and similar contrivances alien enemy. Then comes the mother ship, shoot lasers have terrible, spits armada shalt teley-bombers, etc. In addition, the air floating jellyfish and unimaginable something remotely resembling a huge prehistoric birds of prey. Lasts all this mess for a long time - eight to ten minutes. Your main task - just hold on. Destroying enemies - is nothing more than self-defense. If the purpose of passing by, God bless her, do not pursue. Better power saving and most importantly, the protective screen of your fighter, whose image is in the lower right corner of the screen. At the very start of the mission energy protection covers your entire ship. But, further, the more strikes you miss, the less screen. Once the protection disappears, you will immediately die. A life you (and it will at all levels) is only one. All have to start from the beginning. Especially hurt when you die, tormented in space, seven or eight minutes. To avoid this, open a little secret.
Success at this level can be achieved in various ways, including crumbling everything and everyone left and right. But, it will be useful to pass a level on the defensive. To do this, try to keep «Tellute * in the lower right corner of the screen, shooting only targets primarily fighters, which results agree exactly there. Other enemies do not touch, let them flying squirrels. Do not miss the only great horned red mines, as they explode behind you. In order to destroy the enemy cruiser, shoot him under the belly (when you see him, immediately understand what I mean.) The more your charges will hit the target, the sooner this nightmare is over and you can finally see the most interesting thing is that, as is done «Creature» one of the most exciting games of the year. Wade through MISSION TO SATURN must. If not, ask someone to do it for you.
Anyway, destroying the cruiser, you finish the level and get access to the second part of the game.

All good things, as we know, ends. That's your walks through the maze of enemy ship gone. And while you relax, scientists are not awake. And this is what they got to the bottom.
Advance research captain bags after accident «Amazona» showed changes in DNA structure. Now, the management believes that the living organism - not bags, and a copy of the alien. (Wow povorotik!)
Intensive studies have shown that copy that somewhere close, the third moon of Saturn, has bgg base aliens. Believe that it is the center of the observation and collection of information about the Earth. Further, data is transferred from the solar system.
Your new job says: fly to Tesis and explore the exact location of the base. Weather reports indicate strong cross winds on the surface. Therefore, to arrive safely, you need to go through the canyons on the surface of the planet.
And again, as in the first mission, you control your high-speed fighter. The same rocket launchers and a protective shield in the corner. But things have changed. The flight from the level of "Saturn" will seem to you now a pleasant suburban cycling. To fly through the winding and deep canyons to the station, you need to show maximum skill, reaction and self-control. The only salvation - a strange vehicle that will be your guide through these nightmarish maze. Follow it, the only way to fly, do not hit the rocks. Your guide to the truth rather capricious. He then disappeared for a while, then split in two (chase in these cases left, it was he - the present).
As for the enemy - their abundance, to be honest, exceeding all imaginable limits. Solid hurricane and hail of fire. Council, only one - hold the left mouse button. Let your two notorious missile plants operate at full capacity.

If a miracle happens and all of a sudden you get to the enemy base alive, in return you will be presented with yet another brilliant story in the style ABOARD THE ALIEN SHIP.
The objective is simple - getting on base, destroy the transmitter, with which secret information about the solar system out to other galaxies, and exit from a base in one piece.
See the difference? Now the successful end of the mission will depend not only on the assignment, but also on whether you have time to jump out before the inside all smashed to pieces.
Entering the base, you will again plunge into the beautiful and sinister game world created by the authors to ensure that you spend hours wandering through endless, much more complex and confusing than in the previous case, the maze. We will not describe all the horrors that await you there at every corner, behind every corner. We only note that the list of monsters changes significantly. There are new, even more strange and mysterious than before. And the design of labyrinths, monsters and themselves become more sophisticated. Do not be surprised, some monsters have already had children. Do not trust them, even if they do not attack you. A good enemy - dead enemy, even if that baby mutants. Enemies become more vicious and violent. Huge crabs, mysterious ghosts ... Look at all the pressure points. And do not forget about the bomb. Reserving them for particularly fearsome predators. The principle of the game and will not be changed.
In his wanderings, try as quickly as possible to climb. Easy walking on level deep maze of useless and can last indefinitely. For lifting, use multiple lifts.
If you managed to get the same to the command post, take your time. It is better to put the game on pause and catch your breath, because it is now the fun begins. As soon as you shoot the main control center, the station itself will begin to crumble. Do you have time only to ensure that the shortest way to the main blast to get out. And well you remember the way? Of course - no, and this is not surprising. Useful guide not so much. But they are, after all, there is. Only with their help, and you can focus on the basis of the extent to run away get-away from the explosion. The compass did not expect. Thing, maybe it is good, but in this case is absolutely useless.
So, how much did you do it, but you got your ship and even managed to take off over the future of the ashes.
Exciting and challenging mission so that it may even seem that this is the end game. Not at all ...
Ahead you will find the latest, most important and secret mission. You are trapped in it besides their own will. So it has happened.
Even on your command post see you dead. One has only to read the report, "since the massive explosion that occurred on the alien base. During the explosion, Commander Jason Barr was there, exploring space. At the moment of his whereabouts and do not know anything ... "
But you do something for certain clearly where you are, and what happens to you. And you got to the tunnel, which connects directly to an alien base and the main enemy ship - a huge "Medusa *. During the fight with aliens patrol your ship gets permanent damage and his remains are sucked into a giant ship. Do you also find yourself "on the other side of the fence * and immediately goes into action.
"Medusa * slowly but surely approaching our solar system. Its purpose, as a minimum, to destroy the Earth. If you disagree, try to solve the problem alone.
Again, great graphics, elevators and hallways, closing doors and intricate lifts. And, of course, the monsters who must be destroyed. However, the experience you have now abound, and the rest, even the most important Gad - a matter of technology.
Try to solve the latter problem, and the Earth, so that the Earth, the entire solar system will be saved by Jason Barr. And you get great pleasure from knowing their own greatness, or, at least, of the distance to the end, exciting and amazing games.
‹
›
Home
View web version