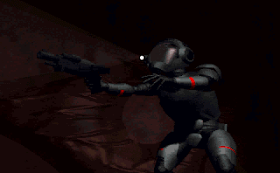 Switch to Shared - "NVRAM Storage" and restart emulator. Before swap CD, save state to file, next CD, upload save state file, restart emulator.
Genre: Action
Perspective: 1st-person
Art: Video backdrop
Gameplay: Rail Shooter
Setting: Sci-Fi / Futuristic
Narrative: Horror
Published by: Virgin Interactive Entertainmen
Developed by: Argonaut Software Ltd.
Released: 1996
Platforms: 3DO Interactive Multiplayer, DOS
Creature Shock is an active adventure game with a popular scientific bias. In 2123, humanity was at a dead end, faced with a rapid overpopulation of the planet and the impossibility of a comfortable existence. To solve the problem, the world government initiates three expeditions to the near space, in search of planets capable of taking part of the population. The ship Amazon, exploring the moons of Jupiter and Saturn, suddenly disappears, but the distress signal still reaches Earth, unambiguously makes it clear that the ship faced an extraterrestrial threat. Having entered the coordinates of the last appearance of the Amazon in the on-board computer, you immediately fly out to learn about the fate of the ship and its crew.
On the approach to Saturn, you suddenly encounter waves of alien ships. It immediately becomes clear that the line of defense of strangers from the point of view of the modern military school is perfectly designed and impenetrable. Only the personal qualities of the pilot will make it possible to approach the infected ship. In addition to ships, several biological life forms have been noted, which is very strange for outer space. The first part of the game - a 3D fly-shooter is passed quite simply. The gameplay, for the sake of high-quality animation a little bit suffers, but in general, everything is as it should be.
In the second part, we land on Amazon, covered with a strange green mass. After suppressing fierce resistance on the surface, we enter the dark tunnels ... Everything happens from the first person, moreover, the control over the movement is minimal, the main emphasis is on accuracy and speed of shooting. In the player's competence there is only the possibility of choosing the direction, when the corridor bifurcates. All the terrible creatures that meet in the corridors have their weak spots - find them! Especially I want to note the "population" of the ship. The monsters are so 3D that you involuntarily feel the weight of the spacesuit and the pressure from the enclosed space. The whole game is made on Full Motion Video technology, so it takes 2 discs!
First the game was developed for PC and 3DO, and later ported to Philips CD-i, Sega Saturn and Sony Playstation. Versions for PlayStation and Saturn have the status of "special editions", as they, compared to the PC version, improved graphics and sound. The version for Atari Jaguar CD was developed but was not released.

On Tethys, strive to fly as low as possible. Then most of the enemies will fly over you, without causing any harm.
Go to Saturn, carefully dodge the asteroids: collisions with them are unpleasant. And do not waste time shooting at asteroids. It is useless.
While inspecting the building (missions 2, 4, 5), move the cursor to the place to be explored, and press the button. In the same way, choose a direction on the forks.
In the lower right corner of the screen is an indicator with a compass and information about energy for the use of weapons and protection, the state of armor and the likelihood of the presence of hostile life forms.
The first mission is to fly to Saturn and neutralize the base ship. When the blue worm appears, stand to the right. Shoot the source of the rays on its tail. At the fork, go left.
The second mission is to save the migration commander. After leaving the ship, kill several monsters. Choose the right path, kill another guard and go to the next compartment.
Open the cocoon on the left side of the tunnel, take the red capsule. At the fork, again go to the right. To kill a giant spider, shoot a green dot on his belly.
At the third fork, again, choose the right road. First, beat the mosquitoes, then the spiders. At the bottom of the tunnel, turn left. On the wooden bridge, on the right, you are waiting for a monster. Apply the bomb (A) - and it will fall to your feet. Now use the blocks (C), and after the monster shoots, hit him in the tail.
In the next compartment turn left, then right. Humanoid aim in the eyes.
At the third stage, you must constantly follow the blue spy satellite. Sometimes the enemy will release false red satellites, do not chase after them.
On the basis of the enemy (the fourth mission), kill the robots and turn to the right. Enter the hatch and, having dealt with the monsters, turn left, then right. Open the cocoon, it will add ammunition. Now go back to the place where you turned to the right, and go up the tunnel. Shoot the mutant's mouth. climbing out of a hole in the ceiling.
After opening the hatch, go left, then right and again left - to the elevator, which takes you to the second floor. To destroy a flying spider, use two bombs.
Do not climb into the round hatch. Shooting in the three-legged robot submachine gun, mark in the red dots. Disable the life support cable of the base hanging from. ceiling, and for two minutes, get out of the maze.
On board the ship (the fifth mission), after reaching the intersection, select the left tunnel. Luke will allow you to pass into the vast hall - the rooms of the womb of Saturn. Shoot in the bridge of your nose, and when you are thrown to the moving container, into the eyes. Standing in the door! Aperture, shoot at the approaching monster. Having blinded the monster, you will be able to enter the control room. As soon as the monster breaks in, shoot the red mark on its engine. It's time to use bombs (all three of them will be needed).
‹
›
Home
View web version