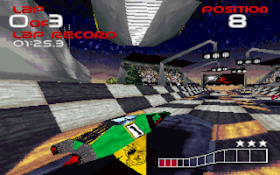 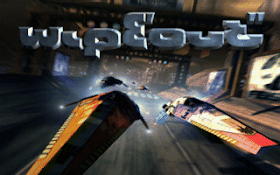 The series is experiencing a critical and commercial success and established himself as a leading franchise Psygnosis and Sony Computer Entertainment (from 1999). The series is widely recognized for its technical and fun gameplay that offers a unique experience of aerodynamic, its futuristic graphics (design of the series was initiated by The Designers Republic), his music including songs from renowned artists of the scene electronics (such as The Chemical Brothers and The Prodigy) and technical achievement that makes a technology showcase (the 3D real-time high definition).
Born on PlayStation, the series also appears on Amiga, Macintosh, Nintendo 64, Saturn and Windows in the era Psygnosis. In the 2000s, it continues on PlayStation 2, PlayStation Portable and PlayStation 3.

WipEout gear are aerodynes using a fictitious technology called Anti-Gravity to levitate a few inches above the ground. A special feature of the gameplay of the series lies in the attitude hold and control the side spoilers so dissociated to better negotiate tight corners. An adjustment may be necessary for beginners, but the mastery of gameplay gives way to heady sensation of speed and floating in the air. In this sense, WipEout approaches the precursor series like: F-Zero.
The tracks have a unique design with complex curves and sophisticated multiple variations slopes (more than 10% slope, tendrils, air bridges ...).
The vessel can be equipped with powerful weapons, including the famous "Quake Disruptor" (or earthquake) which generates a seismic wave that propagates through the circuit. In addition to the pilot, then the strategy is to slow down opponents using weapons.

In one stroke, the player participates in a race of several laps on an opposite several competitors (weapons are deactivated in some episodes of the series) circuit. The winner is the first to cross the finish line. The tournament is a championship for several races. The winner is the player who has the total points higher at the end of every race. These tests are playable solo, multiplayer and online post-2007 episodes.

Against the clock and Quick Tour

In the race against the clock, the player must beat a target time over several revolutions. In the Quick Tour, the player has a limited number of time to beat the target tower towers. Both tests are available in single player mode.

In the test area, the player is alone on the track while the vehicle speed increases permanently, all areas of ten seconds. The game ends when the ship is destroyed. The goal is to keep as long as possible to reap maximum points. The player scores extra points each time it passes over a speed pad, it makes a perfect area (no damage suffered) and he is doing a new lap. Areas provide the perfect bonus energy. This event is pure driving appeared in 2002 Wipeout Fusion.

In the event Eliminator, the player is pitted against seven other competitors who must inflict damage to score points. The winner of the event is the first competitor reaches the total target points. Points garnered vary depending on the amount of damage. The destruction of a ship, a fragment, gives a bonus point while the destruction of his own ship removes points. Energy gauge vessels partially regenerates every turn made while the absorption of active weapons a temporary shield. The event was held in Wip3out (1999). In later episodes, competitors have the opportunity to make a sudden turn to target their opponents face. The race is playable solo, multiplayer and online.

In the event Combat Zone, the player is pitted against seven other competitors and must fly the pavement area and make barrels to fulfill its bar area. By activating acquired bar area, the speed of the vehicle increases the equivalent areas (up to 8 zones) and an obstacle, a barrier zone is enabled on the track in the wake of the vehicle. Collisions with barriers Zone are losing energy and destruction of the vessel causes a penalty in the total area reached. The only way to get a shield to cross the barriers safely is to absorb the bar area. The winner of the event is the first contestant who manages to enter the target area. The race is playable solo, multiplayer and online.

Detonator is a solo event that mixes control and shoot them up. The player must fight his way through the mines and bombs placed on the track and the speed of the vessel increases permanently. The ship is equipped with a main gun and a special weapon to electromagnetic pulse (EMP), which generates a shock wave and recharges flying over cobblestones IEM. In each round of new mines and bombs appear on the track, in addition to those that were not destroyed in previous rounds. The goal is to score maximum points by destroying the mines and surviving as long as possible. Additional points are obtained by performing channels 5, 10 and 15 consecutive shots on goal. The test ends automatically after the 14th round

There are 12 teams in total. The first is that AG Systems established in 2040 under the flag of Japan, and the second is that of Assegai Developments created in 2113, this team represents the United Nations African and the third is that of the U.S.: Auricom created in 2046, is the oldest is that of the fifth Feisar created in 2036, the American team rival Russian team Qirex and the fourth is that of EG.X Technologies founded in 2172, this represents a stable alliance between China and Finland stables, it is the European Union, the sixth team is one of 45 Goteki created in 2095, this team is that of Makana, the team created for the Harimau Malaysia: the first vessels of this team out in 2197, the eighth these stables Icaras is that of Great Britain, the ninth team, Mirage, belongs in the UAE, it was founded in 2202, the tenth team, the Piranha Advencements created for Brazil, is commissioned in 2097, the eleventh stable, that of Qirex-RD represented by the Russians, was founded in 2045, the twelfth team, Triakis is created for Australia's ships this team make their first races in 2197..

The series is known for its iconic futuristic visuals. The Designers Republic, an English graphic design agency, has contributed to additional graphics the first three episodes, in addition to illustrating the packaging (bag, CD and manual). WipEout is one of the first games to its visual identity in the hands of an independent agency. Studio Sheffield, renowned advertising and electronic music (especially for artists Warp Records), worked closely with the team throughout the artistic content: logos and delivered stables, letterpress menus, fictitious brands on billboards or the HUD. In WipEout Fusion is the agency Good Technology, which was outsourced.
Throughout the episodes, the developers have tried to represent a more credible future and the world has gained consistency and refinement with better integrated circuits to their environments. Wipeout 2097 has the ingame advertising (especially for Red Bull brand), which is still unusual at the time and fits the game and its universe.

The series is known for its music, which is an essential part of the gaming experience the soundtrack of the first episode is mainly carried out internally at Psygnosis, by English Tim Wright, aka Cold Storage. From WipEout 2097, music licensing are preferred, from groups of English electronic music in vogue, such as The Chemical Brothers, Orbital, The Prodigy or Propellerheads. The Wipeout series is considered a fine example of this, still new in the industry in the mid-1990s and not always successful, as the music is related to the theme of the game electronica genre is the starting point of the selection which evolves into breakbeat, house, techno and drum and bass.
Developers seek to involve artists to compose new songs or remixes of existing songs. The music should be part of the atmosphere of the game: to be "adrenaline fueled, dirty and frantic," without denying the natural style of the author. There are some requirements, such as length, which generally does not exceed three minutes thirty, and rhythm, with strong time and breaks. The Atom Bomb song, written by Fluke for the second episode, became a centerpiece in the next album. DJ Sasha oversaw the musical direction of Wip3out. From WipEout Fusion, the soundtrack goes international with artists like The Crystal Method, Kraftwerk, Mason, Noisia and Timo Maas.

The WipEout series is one of the most famous representatives of the genre with the F-Zero series from Nintendo. The original episode is cited in various rankings of the "best games of all time" (eg, those of the British magazine Edge in 2000 and 2007).
WipEout is associated with success and image of the PlayStation. Marketed the launch of the console in the West, it helps to make it popular. It also paves the way for Sony's marketing strategy, which is involved in changing the image of the video game to the general public: the game is "connected" and is an older audience (15/25 years). The series continues to be supported by the brand and each new machine hosts at least one new episode.
The influence of WipEout is present in various racing games like Extreme G (1997) Acclaim, Motorhead (1998) Digital Illusions Rolllcage (1999) Attention to Detail, Quantum Redshift (2002) Curly Monsters and Fatal Inertia (2007) Koei Canada. The term "Wipeout-like" appears in the press.
‹
›
Home
View web version