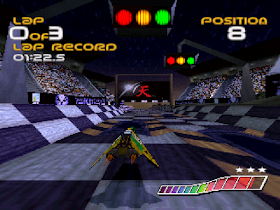 Genre: Action, Racing / Driving
Perspective: 1st-person, Behind view
Vehicular: Hovercraft, Track Racing
Setting: Sci-Fi / Futuristic
Published by: Sony Computer Entertainment of America
Developed by: Psygnosis Limited
Released: 1995
Platforms: PlayStation (PSX, PS1), DOS
Futuristic race shooter. In the process of each arrival, we select weapons and increase the power of our ship. In addition, the game has several ranks and classes to transfer your progress in the game, and taking the first place at each stage will reveal some secret. And lastly: 32 models of ships, 16 different pilots in eight teams, 45 different tracks, each track can have up to seven different profiles! The main idea of this exciting game is to compete in the racing ships of the future. The vast majority of roads in the game Wipeout is characterized by non-standard distinctive features, such as movement over the surface of the planet, steep and dangerous turns and tunnels; but there are some obstacles and vast chasms that you can overcome, only using the possibility of your car to pass difficult areas on a low-flying flight. It should be noted that neither the motion on the screen with great speed, nor the succession of strings of mountain peaks and other features of this planet in the background of your review, do not distract you and do not interfere with focusing on the game.
From this it follows that the firm Psygnosis got to the very point, creating a game Wipeout, giving players real pleasure in going through various difficulties on your truly magnificent and easily controlled, space racing ship. And believe me, every player will get the feeling of a real flight on a car of the future shaving on an unfamiliar planet. If you suddenly find yourself in the abyss, the way to escape will be to carefully and safely lift the spacecraft up. Along the way, you can collect missiles and bombs, which you will need to fight other riders. This "combat" element of the race brings in the game additional variety and excitement.
The Wipeout game is also a great advertisement for Psygnosis and SONY. Therefore, in it you will find many diverse and beautifully executed billboards. With the help of a clever opening of your car, you will be able to see your full outfit. On the road you will also find a large number of beautiful, but dangerous bridges for you. By the way, bridges appear before your eyes in all their splendor, as they use 3D capabilities of Wipeout.
‹
›
Home
View web version